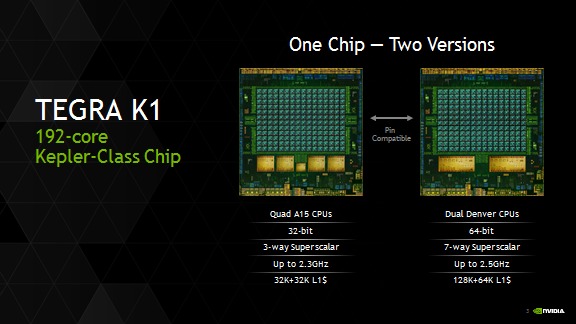 With the relatively good feedback coming from the performance of the Tegra K1 chip, NVIDIA is not resting on its laurels and is moving forward with what looks to be the company’s bet for the near-future’s Android chip – the dual-core 64-bit version of the NVIDIA Tegra K1, codename “Denver”.

Making its claims as the first 64-bit ARM processor for Android (Qualcomm, with the Snapdragon 410, might have something to say about that), NVIDIA says that Denver would probably outperform most quad and octa-core SoCs in the market today. In fact, the company even goes to say that it can match desktop processors in certain tasks.

Those are very confident claims coming from NVIDIA, whose Denver chip runs only two cores. The difference might be in that each core will have7-way superscalar microarchitecture – which in street terms would mean, up to seven concurrent operations can be run on each clock. That’s a drastic improvement from any chip out in the market today.

NVIDIA is also banking on Dynamic Code Optimization, a structure that will figure out optimal routines for different apps and then save them in a dedicated 128MB cache. That means less work on re-optimization, more speed. This 64-bit version of the Tegra K1 will be pin-for-pin compatible with the 32-bit version, which means OEMs won’t have to redesign boards that much. 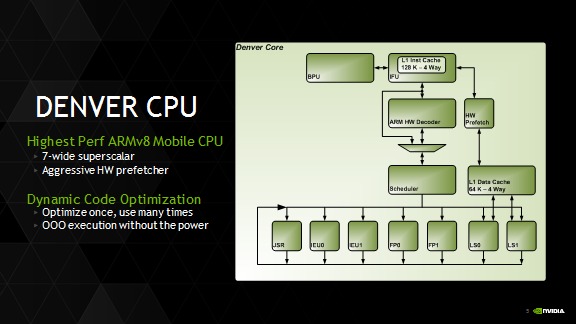 In the end, the main issue will always be performance boosts for the consumer. NVIDIA is already banking on energy efficiency with the Tegra K1. We should know more about processor speeds and the needed RAM combos for Denver as ship date approaches.