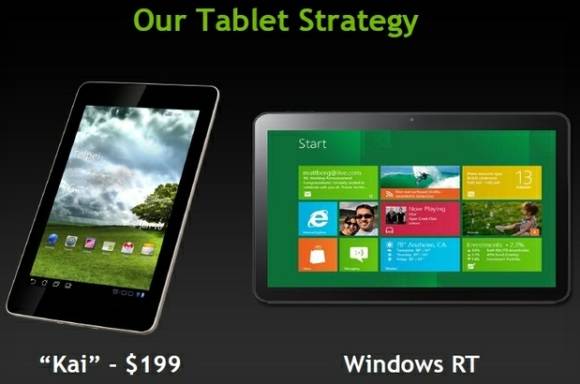 The Tegra 3 is sitting on top of the Android performance world at the moment, but that doesn’t mean that NVIDIA’s going to rest on their laurels. Their new Kai strategy hopes to bring quad-core SoC’s to the $199 price point or lower, a range typically reserved for “reader tablets” with low specs and even lower expectations. Kai isn’t a chip or hardware (that we know of, anyway), it’s Nvidia’s name for their process of reducing the price of high-performance tablet components.

Of course, ASUS was already headed in that direction – the much-anticipated MeMO 370T was equipped with a 7-inch screen and a Tegra 3 when last we saw it. Rumor (so far unsubstantiated) has it that this $250 model has been scrapped, and possibly replaced with Google’s much-rumored Nexus Tablet. With even more rumors indicating that Google will expand to more than one manufacturer for its next developer hardware, we’re essentially left with a lot of information and no knowledge.

Given the slide above spotted in a recent demonstration, Kai might be a reference design, a completed concept machine intended for manufacturers to copy and modify. The practice is common with chip suppliers like Intel and Qualcomm, and every new graphics card is based on a reference design. We’d have to wait and see if manufacturers took the bait, but that tablet in the slide looks an awful lot like a generic ASUS design…