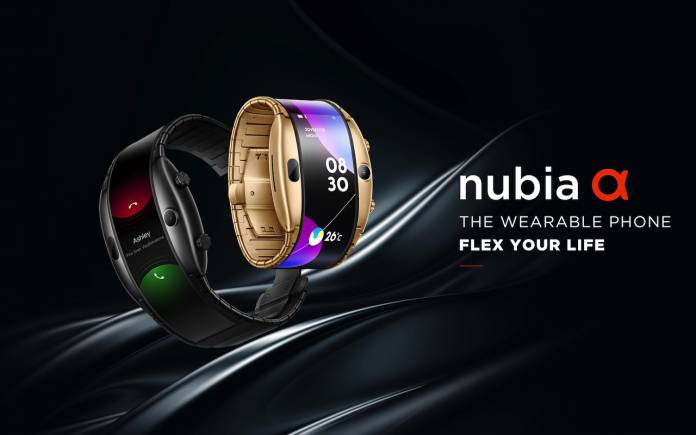 Is this a smartwatch or a smartphone? We say both. Nubia has announced a new product that made us think twice. The Nubia Alpha is described as a wearable phone. At the Mobile World Congress in Barcelona, you can check out the wearable device at Nubia’s booth. You will see the Alpha more of a watch but it’s a full-fledged smartphone too. This gadget comes from several designs like the usual smartwatch you can wear on your wrist and the flexible display idea.

For some, the Nubia Alpha may remind you of the slap bracelet from the 90’s. (That was my first thought.) The Nubia wearable has that look with the 4-inch wrap-around flexible screen. The OLED flexible display tech seems to be slowly taking off and we’re expecting different smart products will be introduced soon.

The Nubia Alpha from ZTE boasts the usual WiFi, Bluetooth, and eSIM technologies. You are free to make calls, send SMS, and access the Internet even without a partner phone. Like with most smartwatches in the market today, the Alpha doubles as a health and fitness tracker. Log your sleep and track whatever physical activity you’re doing.

Do voice commands to quickly to do other tasks. Video calls are made possible by the built-in 5MP selfie camera. It’s really an upgraded version of the usual smartwatch. It also boasts a stainless steel build and the AIM Gesture.

Price tag reads 549 EUR which is about $624 in the US. The device doesn’t run on Wear OS (Android OS) but Nubia’s very own AlphaOS. Other specs include a 192 x 960 pixel resolution, multi-touch touchscreen capabilities, Polyimide protection (not glass), Qualcomm Snapdragon 2100 processor, 8GB onboard storage, 1GB of RAM, and a 500mAh battery.