New smartphones have just landed on NTT DoCoMo: the Sharp AQUOS ZETA SH-03G, Sharp AQUOS EVER SH-04G, and the Sony Xperia A4 SO-04G. All three phones are part of the 2015 summer lineup that consists of more smartphones and tablets, most of which will be released before the month of May ends.

Headlining the lineup are the Galaxy S6 and Galaxy S6 edge that are now on sale in Japan. But since more people demand for affordable smartphones, the mobile network is offering two new Sharp AQUOS units and one Sony Xperia phone. These are mid-range phones but each one comes with specs that can make them rival the latest premium phones.

This new AQUOS phone comes equipped with IGZO LCD display that features an improved backlight and color filters. The AQUOS ZETA SH-03G comes with a metal frame, a camera that can shoot at 210fps, optical image stabilization, wide-angle lens, and some 4K video recording capabilities.

At the back of the phone, you can see a new fingerprint sensor that can be used for authentication and unlocking the phone. It’s carried by DoCoMo so you can connect to PREMIUM 4G especially when needed. Phone also supports VoLTE calling. As for the features, there’s a 5.5-inch Full HD display screen, Snapdragon 810 processor, 13MP main camera, 2MP front-facing cam, 3GB RAM, 32GB built-in storage, and 3000mAh battery. Phone will be available in white, black, and red.

This new Sony Xperia A4 runs Android 5.0 Lollipop and is considered a worthy successor to the Sony Xperia Z3 Compact. Expect this one to be available in mid-June. Phones also available in Gray, Pink, Blue, and 4 colors of White. 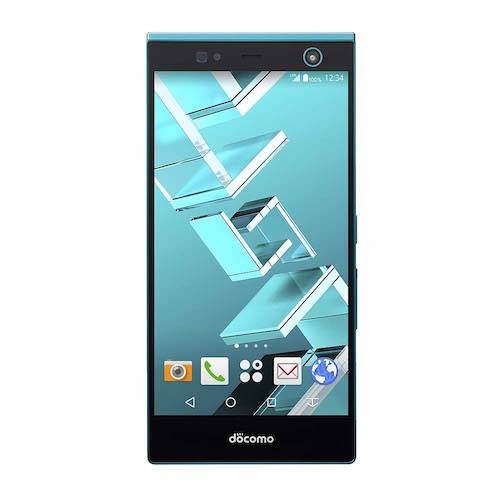 The ARROWS NX F-04G is another smartphone packed with the standard smartphone features. This one boasts an iris scanner for authentication of devices. The model will be available later this May. Specs include a 5.2-inch screen with 2560 × 1440 QHD resolution and a 21MP main camera. This one has got an iris scanner too. It’s one feature that some of the latest Japanese smartphones are getting for a more secure authentication for different purposes.

Here’s a list of other devices available from NTT DoCoMo: