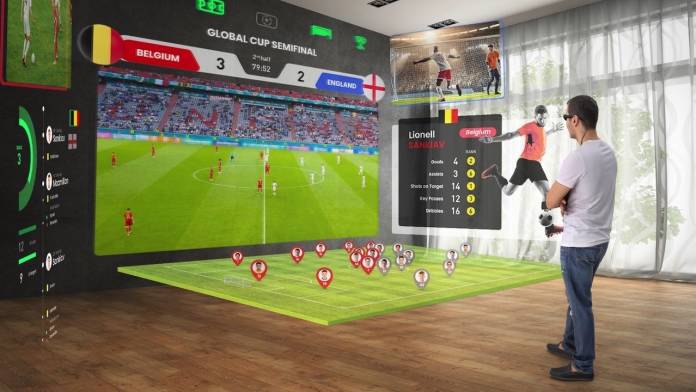 Augmented reality isn’t a thing of the past. No, not yet. The technology isn’t fully there yet but we believe AR together with VR still has potential to be more popular among consumers. One of the brands becoming more known for such efforts is Nreal. Last year, there was the NReal Light AR glasses bundled with the Samsung Galaxy Note 20 in South Korea. A few months ago, we were introduced to the Nreal Air smartglasses. The pair is lightweight and is especially made for watching.

Today, the Nreal Light gets real in the US. The new AR glasses are available exclusive from Verizon. The pair will be ready in-store beginning November 20. Online sales will start on December 2.

The Nreal Light is a new pair of ready-to-wear augmented reality glasses. The pair offers an immersive AR experience. With this release, Nreal and Verizon are hoping the consumer AR market will begin to go more commercial.

The next-generation mobile platform goes beyond the use of phone. The pair works though with compatible iOS or Android devices. At launch, you can enjoy over 17 AR-native apps and games like Ghost Hunter, FigminXR, Table Trenches, Dunkaar, and Magician Mastery. You can get them straight from the Google Play Store.

Nreal Light will be sold for $599. Feel free to enjoy the AR glasses bundled with any Samsung Galaxy 5G phone or the older OnePlus 8 5G UW.

There aren’t many AR apps yet by the Nreal team wants to encourage more details to work on them. The goal is to attract more consumers who may be part of a new ware of mobile consumption.

The NRSDK (Nreal SDK) is being updated so more content providers can migrate their content from other platforms to the Nreal AR glasses. Nreal teamed up with Accedo to introduce the FutureTV which will deliver a 3D environment that includes integrated e-commerce functions, multi-game displays, and 3D objects.