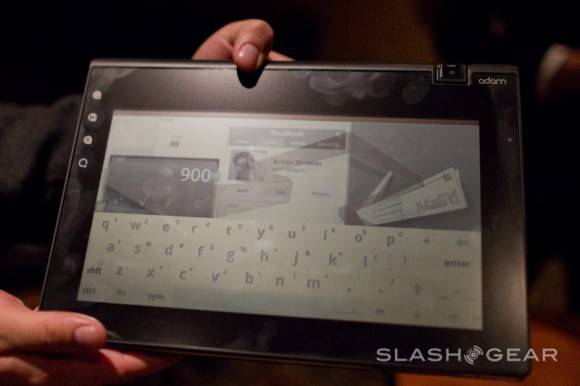 The tablet market is certainly one that’s heating up, especially with CES 2011 fully underway. We know there’s even more devices coming, most of which will be running Google’s mobile Operating System Android. However, one tablet has managed to stand out even dating back to CES 2010, and that’s Notion Ink’s Adam tablet device. It’s gone through plenty of transitions, transformations, and even a few hiccups, but now SlashGear has managed to grab some hands-on time with the device, in its latest iterations, and have some certainly positive things to say about it.

Unfortunately for Notion Ink, when they initially showcased the Adam tablet, their hardware was top-of-the-line. Now, though, there’s plenty of other companies launching tablet devices, and some of them even have Tegra 2 under the hood, ready to go. So, Notion Ink’s determination to stay cutting-edge has lead to the creation of Eden, the company’s proprietary User Interface (UI). Which, frankly, is not only fun to use, but makes multitasking easy to use, and simple on a tablet. Additionally, while Adam is a dual-core-powered device, it works as a single-core until the device needs the second core to handle usage. If there’s still capacity in the first, the Adam will maintain that usage until it is necessary to do otherwise.

Notion Ink has done a lot with the applications, which they call “mini-apps,” to make sure that taxing the tablet’s resources are always cut to a minimum, but that the apps themselves still work to their full extent, and that includes the widgets that are thrown in with every tablet-optimized app that runs on the Adam. Background applications are frozen in their most current state, so that when you need to bring them up again, the process is smooth.

The device will slow down with a multitude of applications loaded up. For SlashGear a noticeable slow down appeared when we launched 20 different applications. That will change depending on the way you use that software, the apps you open, and how you handle the tablet in its every day usage.

Head through the source link to find the full hands-on, photo gallery, and videos galore that SlashGear managed to grab with their time with the Adam.