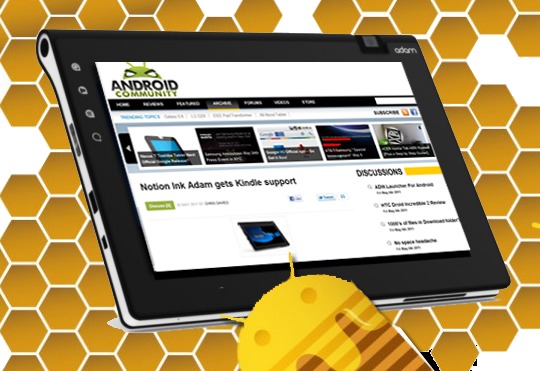 Man, when we reported earlier this week that Notion Ink was back with more Adam news, we didn’t know they’d be back with a vengeance. But that seems to be the case as we’ve got two more bits of news about the home grown Android Tablet. The first bit of news is that a stalwart Android fan named MrGuy, has managed to port Android 3.0 (Honeycomb) onto his Adam. He’s managed to boot up the system, install all his apps, and troubleshoot OpenGL issues which prompted Force Close. Pretty cool.

Secondly, Notion Ink is reporting that the Dolphin Browser HD will be bundled with the next update later this month. It’ll also come pre-installed on future orders. Notion also announced that starting in June, the Adam project will be working towards 3D gesture detection, Parallel Processing, and support for NEON and PVRTC. Their blog will chronicle all these developments as they have since it’s inception back in 2009.

Notion Ink launched back then in an effort to chronicle the development of an Android tablet from scratch. The result has been a window into the world of Android gadget development, informing readers of the lessons learned step by step. For awhile, though, Notion had been a bit silent, dealing with customer service and ordering issues which left users a bit frustrated. But this past week, stories broke that shows that Notion is on the development trail again thanks to OS updates, Kindle eBook Reader support, and now custom Honeycomb ROM and Dolphin Browser support. So, is Adam once again in the house, or will it continue its quick slide into the pits of no official support and mediocrity once the new wave of tablets is out? We shall see.