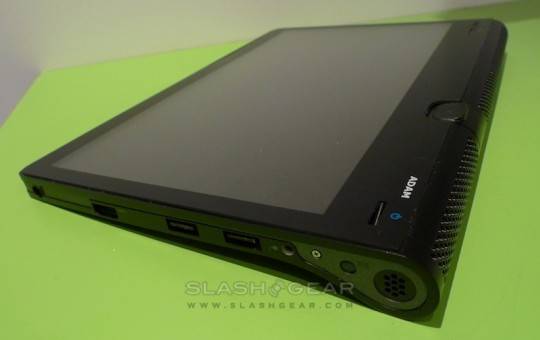 One of the stand-out gadgets out there, Notion Ink’s Adam tablet, runs Android. And it does it so well, and tucked away so nicely in a gorgeous piece of hardware, that we can safely say it’s one of our most anticipated devices coming down the pipe. Unfortunately, there’s been all sorts of rumors floating around that the company has had some set-backs, and therefore the tablet would be forced to have some launch delays. SlashGear caught up with the founder of Notion Ink, Rohan Shravan, and got the low-down on what’s going on with our favorite, unreleased tablet.

And, thankfully, it’s not bad news. According to Shravan, the company is busy celebrating today, as they’ve just sealed the deal on their last bit of investment. While they couldn’t tell SlashGear who the final investors were, they did say that with the extra boost in money, the company should be ready to pump out 100,000 Adam’s every month. To go along with that bit of news, the company confirmed that they are still on track for a third quarter, 2010 launch, and that there haven’t been any monumental set-backs to prevent a timely launch.

The Notion Ink Adam already comes in two flavors: the first features Pixel Qi’s 3qi indoor/outdoor transflective display, and rocks the second generation Tegra chipset from NVIDIA. The other is a tablet with the run-of-the-mill LCD, but also comes with Tegra inside. The latter will have a cheaper price tag, due to the lack of the Pixel Qi display. The company suggested that a third option could be coming later, too. This one wouldn’t feature Tegra, though, and there would be other alterations to make the price tag even cheaper than the other LCD model. No details, unfortunately, but if it’s anywhere as good as the model we’ve seen, it will be a welcomed addition to the Adam family. Check out SlashGear’s hands-on with the Adam below.