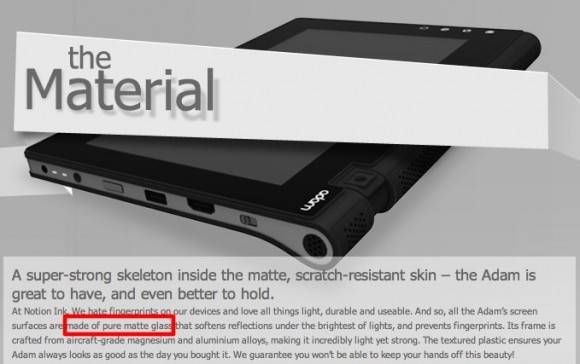 So this morning we received a mail from an intrepid reader that informed us that, despite the listing of Notion Ink’s Honeycomb tablet Adam’s matte and scratch resistant display, it was neither! Our “Man in UK” mister Chris Davies shot a post up in what’s considered our (USA’s) middle of the night, and a quick response came to use via Notion Ink’s own Rohan Shravran.

The dispute here comes from a promise in the spec sheet of the Notion Ink Adam to have a screen “made of pure matte glass,” while company emails to pre-order customers [seen here] are noting that the display is both glossy and non-scratch resistant, needing an adhesive screen protector to meet standards. The big concern here is that even if the screen protector is shipped already attached to the screen, customers are going to feel cheated.

Now we’ve got an official response from Rohan – take a peek:

“Adam comes with 2 layers of Matte Surfaces, one on the PQ LCD screen, other through the Matte Screen protector on the outside Glass. Inside layer cuts the gloss on the LCD layer and colors are not washed out. For the outside glass we are using specially designed matte covers which users at their end can decide to use or not. It is finger stain resistant (oil component) and has same matte properties as on the LCD. The glass in itself is further scratch resistant.”