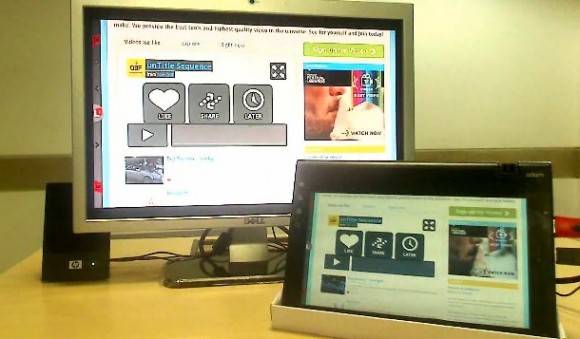 Presents for everyone! Look at this little batch of videos sent out by Notion Ink over the holiday weekend, just jamming away as the release date for the tablet comes ever closer. The hardware AND the software are showed off in a lovely set of vids that also includes an HDMI demo as well as a demo of a “false digitizer” over a Wifi connection. Benchmarking against an iPad, iPhone and other Android browsers too!

As Chris notes, there seems to have been some confusion in the past about what’s going on as far as digitizer tech in the Adam. There will be no active digitizer, instead the 10.1-inch capacitive touchscreen will be able to act as a massive trackpad for your computer. Also instead, if you’ve got a capacitive stylus, you could use the device for drawing if you’d like. Will it replace a Wacom graphics tablet? Probably not.

It seems as though Adam will be able to work with USB modems in the future, the biggest obstacle being drivers being developed for them to work properly with the system. In the videos here you’ll se a demo of the Adam boot-animation as well as the browser, and you’ll see that all the controls are running down a narrow bar on the left side, pop-out buttons for tab management appearing as well. As far as benchmarking goes, Adam scores 51,049 in Rightware’s BrowserMark benchmarking tool, versus the iPad’s 38,620 and the Nexus One’s 23,726. That’s freaking amazing. And there’s multitouch, of course. Look, look, look!