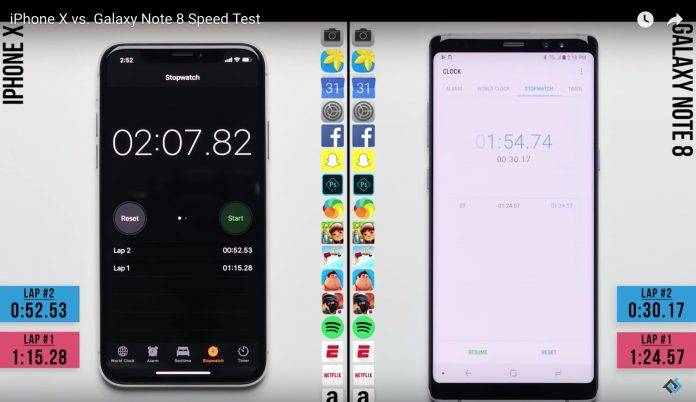 The article title in itself is a spoiler already, so yes, a not-so-scientific speed test conducted by YouTube channel PhoneBuff conducted ended with the Samsung Galaxy Note 8 defeating the recently released iPhone X by 22 seconds. Just last month, they also conducted a speed test between the Note 8 and the iPhone 8 Plus, where Samsung’s phablet also won but just by six seconds. This time around, it wasn’t as easy as you would expect, based on just the specs of the two devices.

The iPhone X has the A11 Bionic chip and 3GB RAM while the Galaxy Note 8 has a Snapdragon 835 CPU and 6GB of RAM. So it might seem obvious on paper who will win a speed test but in practice, it wasn’t as simple as that. Their speed test is opening a series of apps once for the first lap and then doing some simple tasks. Here, the iPhone X actually won and was way faster, clocking in at 1:15:28 while the Note 8 was at 1:24:57.

However in the 2nd lap, where the same apps were reopened to test the device’s multi-tasking capabilities, that’s when the Note 8 began to shine and pull away from the iPhone X. Apple’s “real flagship” (poor iPhone 8) wasn’t able to keep some games open in the background, probably because they weren’t iPhone X optimized just yet. So in the end, the Samsung phablet finished all in all at 1:54 while Apple’s newest device finished at a total of 2:07.

While it’s a pretty good victory for the Galaxy Note 8, it does bring to light a few weaknesses in terms of opening several apps, despite its 6GB of RAM. But when it comes to multitasking, it did its job pretty well.