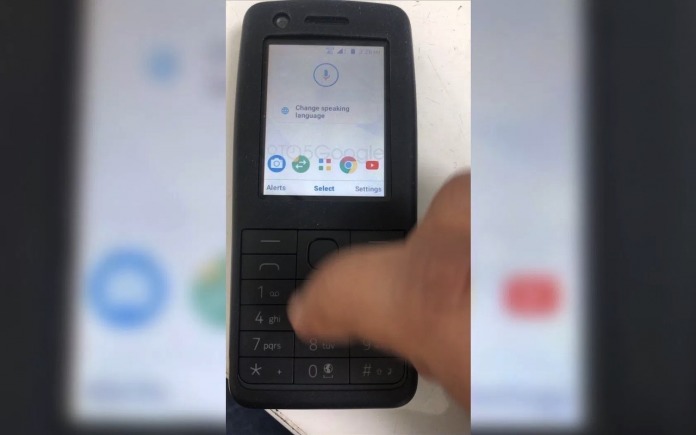 Nokia is remaining in the mobile industry. Thanks to HMD Global for giving it a new lease on life. Several Android smartphones have been introduced the past couple of years and we can expect more. After smartphones, Android may be rolling out feature phones. It’s not just a concept but a possibility even without the touchscreen display. It may be different from the Android Go because a device will have to be navigated using number keys, shoulder buttons, and a traditional d-pad.

There is no confirmation or official announcement from Google but a touchless Android is possible. There may be limits, of course, like the app switcher being controlled but a physical button.

A source has shared online a picture of a Nokia feature phone running Android. No clear information about the brand has been provided but it appears to be a Nokia phone. It can be an old phone or a prototype.

The feature phone looks like any ordinary brick phone with a taller screen. It may take you back to the early days of smartphones because of the experience. The Android home screen shows a standard mic which can be used for voice searches or Google Assistant. The Android feature phone also allows “Change speaking language”.

A row of Android app icons appears. There’s the familiar four-color scheme by Google. We see there’s YouTube, Chrome, and the Camera. A fourth icon remains a mystery to us but we spot a familiar Material Design style.

The Android feature phone shows a UI with the standard battery and signal at the top part of the screen. At the bottom, there are three options provided: Alers, Select, and Settings. They can all be accessed with a hard button press.

A Nokia feature phone running Android is possible. We’ll just have to wait for the official announcement from either Nokia (or HMD) or the Android team.