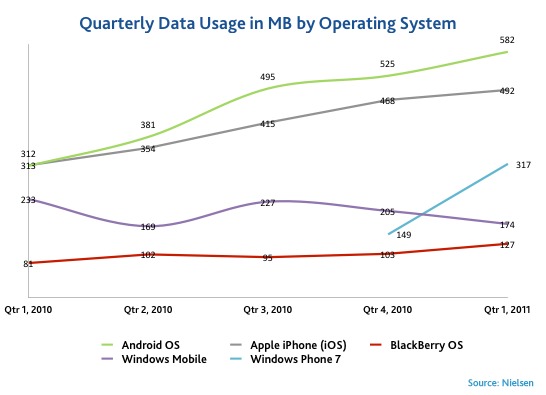 We have seen a few reports like this before basically saying that Android and its users are hungry for data and just so happen to use the most. This specific report mentions U.S. smartphone data usage based on Operating System and in this case Android is the clear leader as usual. Not only has mobile data jumped around 89% over the past year but Android and iOS continues to climb and climb.

There could be a few possibly answers here, not only is Android selling over 300,000 smartphones a day but they have larger screens than most the competition, mainly the iPhone and some are now reaching 4.5″ in size. We all love our NFL Mobile on Verizon or our Netflix and those could all be a few explanations.

Recently Nielsen said in a data usage report that on average Android users used 582MB per month in Q1 2011 opposed to 492MB per month by iPhone users. Windows Phone 7 for its short time on the market looks to be using a fair amount as well. When it comes down to it we all love our phones, they are capable of sooo many different things we might as well use them to their full potential right — I mean isn’t that why we pay for unlimited data? I know some of this might be thanks to the Android rooting and tethering community but that is only a small percentage. I know I am way over that 500MB a month mark personally, but that is just me and I don’t tether, I blame Twitter. While I’m on the twitter topic feel free to follow us at @androids for all the latest news.