For those of you getting ready for another exciting weekend of football and Week 3 of the NFL, we have a brand new game on Android worth sharing. It’s called NFL Runner: Football Dash, and is essentially a watered down version of Temple Run that’s been replaced with NFL players. It’s quite fun and officially licensed too.

NFL Runner is an officially licensed NFL game. Meaning we’ll have all the official and accurate logos and such. Sadly we don’t have players names, but you’ll be able to just imagine you’re Adrian Peterson or Michael Vick as you run throughout the levels.

You’ll be springing into the end zone in no time with this game brought to us by the NFL. Developed by Pocket Gem we can expect it to be better than many other similar types of games too. It’s much better than all those movie knock-off titles, that’s for sure. With a fast pace and great graphics this is a must-try for many NFL fans. 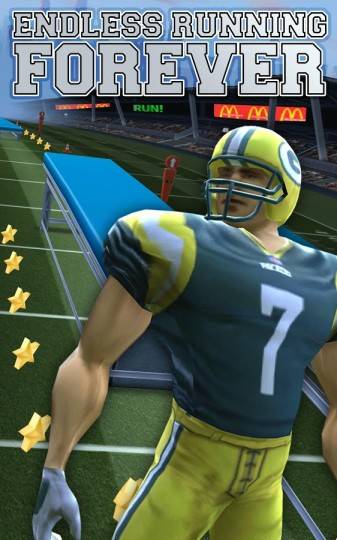 You can completely customize your player, and team. Then from there collect power-ups to boost speeds past defenders, increase jumps, and even throw further. They have plenty of power-ups for those looking to enjoy hours and hours of endless runner fun. It’s very similar to Temple Run or Subway Surfers, so if you enjoy those titles, this is worth at least checking out. After all, it is completely free.

However, there’s ads for McDonald’s during gameplay, and your collected coins are added every 8 hours, so if you don’t have enough, you’ll have to make some in-app purchased to keep playing. So in a way it isn’t free unless you’re willing to wait. Terrible.