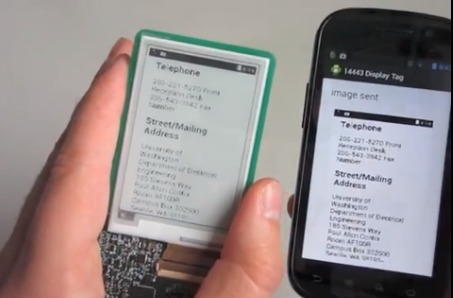 Aside from being easy on the eyes, one of the advertised advantages of e-ink displays is the low power consumption and, therefore, longer battery life, making it ideal for long-lasting e-book readers. But even that could soon be a thing of the past thanks to NFC technology.

Because they display only static content, e-ink displays are able to use up very little power. They only need to use power whenever the content changes, like when turning a page or displaying a different image. As it turns out, NFC gives out just the right amount of power needed to accomplish that.

In a proof-of-concept video, a joint collaboration between Intel, the University of Washington, and the University of Massachusetts show how an NFC-enabled smartphone was able to transfer an image shown on the phone’s screen to an e-ink display. The high-level concept is quite simple. As the phone’s NFC transfers the image, the e-ink display draws just enough power to change its display. Here’s a video demonstrating how it’s done.

Although there is currently a noticeable delay, the system is still in its early stages and could probably still be improved for faster response times. This concept could give way to a new breed of energy-efficient displays that could be used as a secondary screen for situations where you need something to always be displayed but don’t want to risk running down your phone’s battery, like when viewing a map, contact information, or an image.