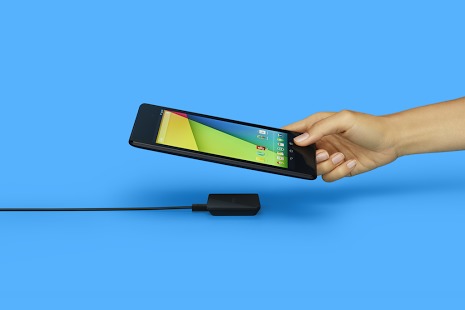 Google gave a sneak peek of a new wireless charging station it had under wraps when it launched the Nexus 5. The dock is now available for purchase and, as expected, is compatible with more than just Google’s latest Nexus smartphone.

Google already had a wireless charger, one that was specifically designed for the Nexus 4. That piece of hardware was not only functional but also a piece of art, sporting a half-spherical shape with the top half cut off at an angle. This allowed the smartphone to be charged at a slightly raised position, making it easy to see the screen when docked. However, despite the rather sticky plastic surface, the orb didn’t inspire much confidence when it comes to stability.

The new Nexus wireless charger sacrifices that tilted visibility for more stability. The charger itself, which tapers towards the bottom, adheres securely to surfaces. The top plate features a magnetic face that holds the Nexus 5 and the Nexus 7 in place but still makes it easy to grab the device in a rush. It was theorized that the charger will also be compatible with the older Nexus 4 and that is now officially confirmed. Other devices compatiable with the Qi wireless charging standard have yet to be tested.

The Nexus Wireless Charger is available from Google Play Store with a price tag of $49.99. Unfortunately, for the time being, it is only available in the US and Canada, so interested buyers outside those two countries will have to wait for other channels.