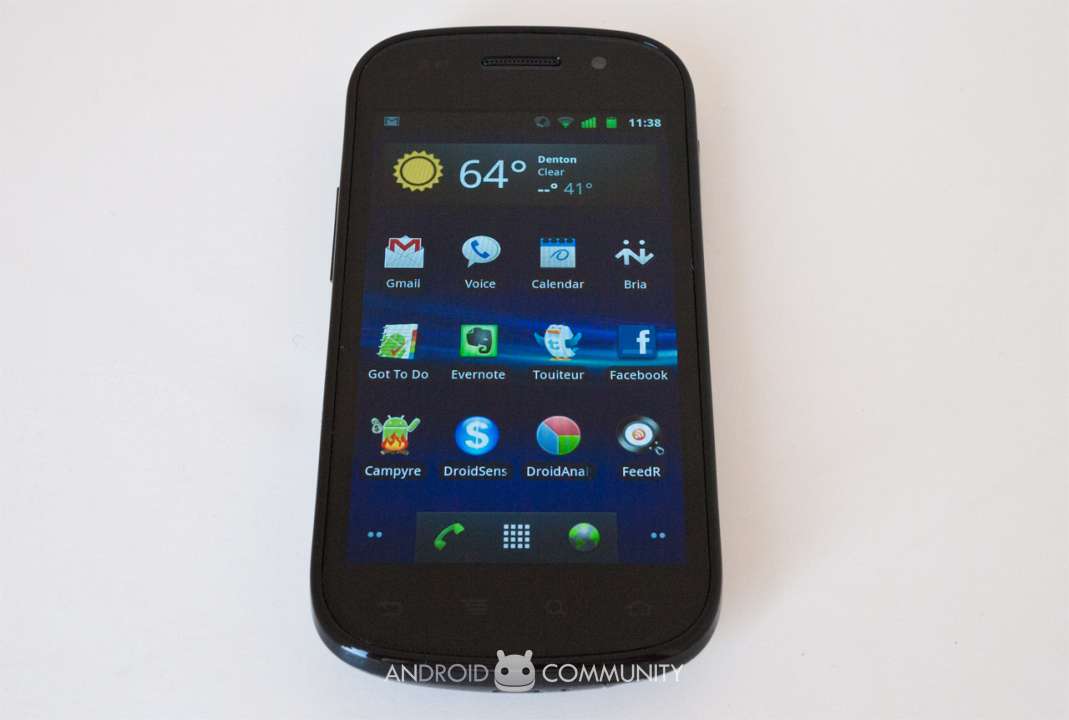 Freshly on sale in the US today, and headed to the UK next week, the Nexus S is Google’s second attempt to guide the Android ecosystem with a hardware reference design. Made by Samsung, rather than the HTC origins of the Nexus One, the smartphone arguably has a more difficult task ahead: the complaint today is one of OS fragmentation, not merely lagging performance. Can the Nexus S set Android manufacturers back on track? Check out our full review to find out.

If you’ve used a Galaxy S, the Nexus S won’t feel all that foreign. The Samsung-made handset has a plastic body, unlike the metal of the Nexus One, and though it feels suitably tough it’s not as reassuring in the hand as its predecessor. It does make for a lightweight phone, however, and given the front is taken up with the considerable charms of a 4-inch WVGA Super AMOLED display, it’s quite an appealing slice altogether. Samsung’s screen technology remains the best mobile panel this side of Apple’s Retina Display, bright, clear and beautifully color-saturated.

The display has a slight curve to it, in a move Samsung has branded “Contour”; the company argues that makes the Nexus S easier to use with a single hand, as well as more comfortable over time. In practice, it’s perhaps too early to tell: the curve is too shallow to make an instantly noticeable difference, though it does at least keep the fascia of the Nexus S off the desk when placed face-down. 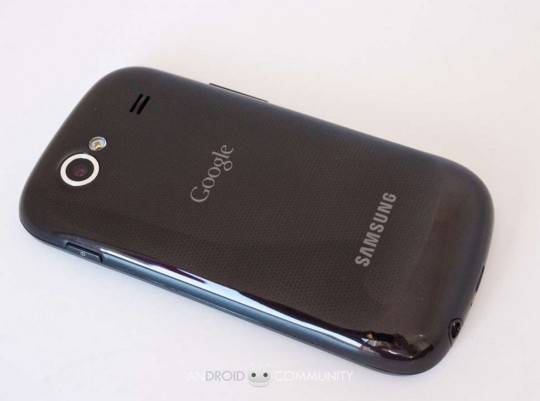 Controls are minimal – the usual four touch-sensitive keys under the display, then a volume rocker and power button on the edges – and the ports have been moved to the bottom of the handset: Samsung offers microUSB for charge/sync and a 3.5mm headphones jack. Wireless connectivity includes quadband GSM/EDGE and UMTS/HSPA for T-Mobile USA or the gamut of European and Asian 3G bands; if you want AT&T 3G, you’re out of luck. Otherwise there’s WiFi b/g/n and Bluetooth 2.1 – though not, as with the Galaxy S, Bluetooth 3.0 – along with Bluetooth, GPS, a digital compass and accelerometer.

GPS performance has been a mixed bag. The Nexus S is happily free from the glaring positioning issues that initially affected the Galaxy S range, but it does sometimes show reluctance to accept it has achieved a GPS lock. On occasions, we found Google Maps would be able to follow our position as we moved around, but Navigation refused to calculate directions claiming it was yet to get a positioning fix.

The Nexus S also debuts NFC or Near-Field Communications on an Android device, and in fact the short-range wireless technology is one of the Google phone’s flagship features. Google envisages a world where Android users can scan businesses, products and each other with their handsets and pull up information from those NFC tags, as well as making payments and exchanging data.

In its first incarnation, NFC on the Nexus S is a little more mundane: limited to reading tags, rather than writing to them or making data exchanges, it will primarily work with the Google Places Business Kits the search giant is trialling, offering business reviews and information if you scan a NFC sticker they’ve put up near their door. The results show up in the new Tags app.

Star of the show is Android 2.3 Gingerbread, making its first debut on a mobile device and doing so free of Samsung’s TouchWiz UI or any other manufacturer-specific tweaks. This is Android as Google intends it, and it’s the most solid implementation to date. 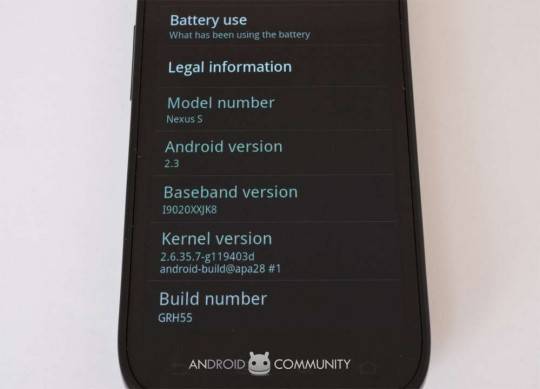 Most obviously changed is the color scheme, with the greys, graduations and brighter colors of Froyo and earlier versions replaced with blacks and chips of lime green. Google says this isn’t solely an aesthetic refresh but one that aids battery life; AMOLED displays, for instance, require less power to show black than they do colors. There are also new animations, such as the retro CRT TV shut down when you lock the phone, and a subtle orange flare when you reach the end of lists.

Text entry has also had a rethink, with a new onscreen keyboard layout that trades slightly smaller keys for multitouch support. It’s an exchange we’re happy to make, though, since you can now hold down the shift or symbol keys with one finger and tap out letters and numbers with the other. Even after just a week of use, we’re faster than we are with the Froyo keyboard.

Once you’ve entered text, there are new ways to manage it as well. Tapping and holding a word selects it, and then you have easily-dragged highlight bars to select different sections. Where the new system falls short is in older apps, which are seemingly yet to be brought up to speed; on several occasions we’ve had to double-tap to select still, which leaves the OS feeling inconsistent. It’s certainly not a deal-breaker, but it’s an example of where, say, Apple’s stricter controls in iOS pay dividends for predictable user-experience.

Flash Player 10.1 was not pre-installed out of the box, but it works well once downloaded from the Android Market. Videos run smoothly, more so than on a Hummingbird-powered Galaxy S family device. Unfortunately the new version of Google Maps, complete with 3D city renders and new multitouch gestures, isn’t ready in time for the Nexus S’ release, so we’ll have to wait and see how that performs.

Samsung’s 1GHz Hummingbird processor isn’t new; it’s the same chip at the heart of the well-received Galaxy S range of smartphones, together with the Samsung Galaxy Tab slate.

What remains to be seen is how the performance of the Nexus S holds up to the various dual-core Android smartphones we’re expecting to see reach the market in 2011. LG’s Optimus 2X, for instance, will offer NVIDIA’s dual-core 1GHz Tegra 2 chipset, and it’s not going to be the only one; while the Nexus One pushed the performance envelope considerably, the Nexus S feels like it’s at the tail-end of a hardware phase.

That’s not to say the Nexus S is slow. Android 2.3 Gingerbread whips along nicely, and while on paper we’d like to see more RAM than the 512MB Samsung has installed, at no point has the phone felt sluggish or short on memory. Apps and Live Wallpapers are handled with no issues, and there’s a healthy 1GB of storage for your programs; the 16GB of user memory is treated as a memory card – albeit a particularly fast one – and you can do the usual trick of shifting apps to that storage if the software supports it.

As a phone, T-Mobile’s network proved solid and audio performance is among the best we’ve encountered on a recent Android device. Callers reported no issues with voice quality, and similarly both the earpiece and the speaker were similarly loud and clear. The front-facing camera handles video calls well – though VGA stills are murky and uninspiring – though Google’s failure to include native video chat functionality in Gingerbread is a significant shortcoming in comparison to Apple’s FaceTime.

The main camera is more successful, producing stills that are better in most cases than those from the Galaxy S range. Colors are rich and there’s decent contrast in natural daylight; more impressively, we didn’t have to reach for the LED flash quite as often as normal in low-light or indoor conditions. Conversely, video recording is underwhelming, limited to 720 x 480 resolution rather than 720p HD. There’s also no HDMI port for hooking up your HDTV, nor DLNA wireless streaming. We seldom use either of those features ourselves, but on a flagship device their omission is annoying. 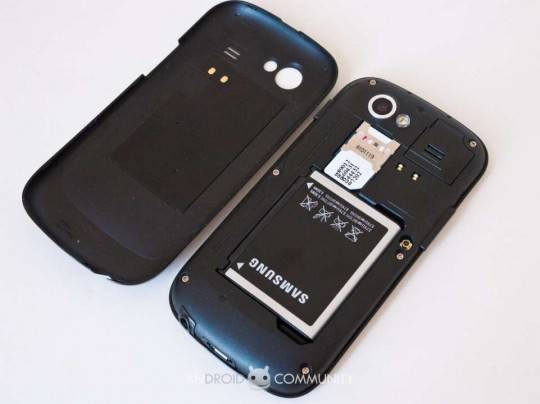 Battery life exceeded our expectations, with the Nexus S readily capable of putting in a full day’s worth of use despite having push email turned on and our regular use of the browser and messaging features. Gingerbread gets a new battery display system, too: the bars showing each element of the phone’s power consumption are still there, but there’s also a graph tracking power use over time.

Gingerbread is undoubtedly the star of the show here, and that leaves the Nexus S in a potentially difficult position. Unlike the Nexus One, which had a window during which its specifications remained superlative before other devices caught up, beyond the NFC chip there’s arguably nothing special about the Nexus S’ hardware. That means, once Android 2.3 hits the Nexus One, the Galaxy S and other Android phones, the Nexus S will have lost much of its unique appeal.

That’s not to say it’s a bad device, and in fact it’s arguably the best Android smartphone on the market today (as long as you don’t want a hardware keyboard). There’s also the reassurance that Nexus S owners will likely see the first software updates for future iterations of Android, unlike manufacturer-modified versions. Hopefully the increasingly solid user-experience of out-of-the-box Android will be enough to convince other companies to put aside their adaptations, but given how much those changes – like HTC Sense and TouchWiz – are used to differentiate ostensibly similar hardware, we’re not especially hopeful that this something Google will be able to easily sway.

More promising is NFC, though at the moment its a hardware and software combination still in search of real functionality. By the time it gathers momentum, we’re expecting plenty more Android devices to include the short-range wireless chips; that’s good for Google overall, but claws away at more of the Nexus S’ unique offering.

Still, as with the Nexus One, this new Google phone isn’t really the search giant’s attempt to corner the smartphone hardware market. Instead, it’s an expensive play to guide the development of Android handsets altogether – a marketing strategy for where the open-source “use it how you wish” Android ethos falls short of convincing manufacturing partners what it is that customers will want and, undoubtedly, be persuaded by Google that they want in a new handset.

If you’re in the market for a new Android device then the Nexus S is the best around at the moment. Its window to shine will likely be short-lived, however, as dual-core Android handsets reach the market early in the new year. Critics may eventually suggest that the Nexus S missed the mark, but as long as it puts NFC on the radar, we’ve a feeling Google will consider it a success.