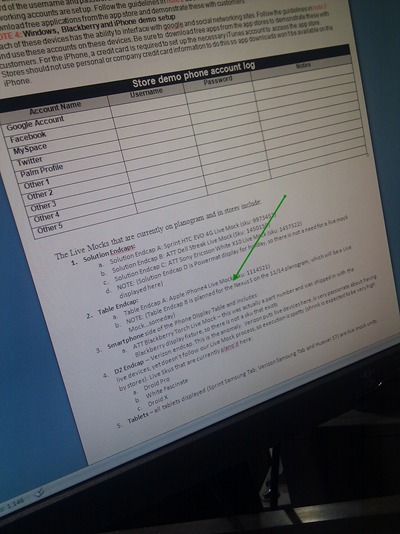 We know there’s been a lot of Nexus S news today, but you’ll have to bear with us as we rifle through it, and bring you what looks important. For instance, it’s November 11th right now (for those of you who may have just woken up), and according to a new internal Best Buy screenshot, it looks like the electronics retailer is getting ready to drop some displays onto locations across the country beginning November 14th.

According to the image, it looks like Best Buy is setting up to secure end-caps for the displays, which will likely include a lot of promotional materials for the device, but probably won’t feature a live, functioning handset. According to the report, the image was taken by an individual who coerced his way behind the Best Buy desk, and was allowed to look through their system. The individual managed to grab a screenshot, of what you can see above, and confirms that the Nexus S displays will be going up by November 14th.

Of course, all of this could lead up to nothing. We are still several weeks away from CES 2011, which is the same time that Google and HTC originally unveiled the Nexus One at their HQ. Will Google and Samsung wait? Or are they primed to get this device out by the time holiday shopping really kicks off? If these display units are set to land in stores so soon, we may know what we’re putting on our list.

[via AndroidPolice; thanks, Artem!]