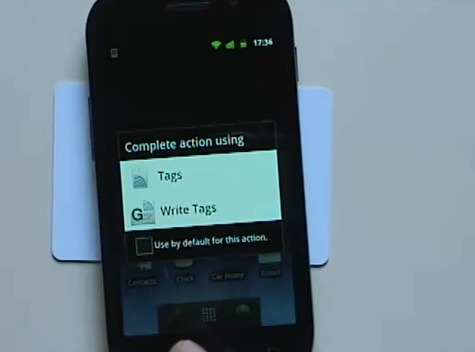 So you might very well know that the NFC revolution is really ramping up as of late in the Android world. You might also know that Google’s Nexus S handset, out already right this moment, has NFC tag reading capabilities, this before there’s extensive compatibility available in the world of apps and consumerism. What you might NOT know is that the Nexus S can WRITE NFC tags just as well as it can read them.

A group in Argentina by the name of Gibraltar Software Factory has been picking their way through the Nexus S, through its Android 2.3 Gingerbread innards, and have identified several API calls, each of them hidden at the moment, that deal with Android’s tag writing functionality. Then they took a video of it. How very kind of them! Take a look here:

An employee (and blogger employed by) GSF Gustavo Gonzalez notes: “We’ve been analyzing the Android kernel source code and we found a lot of ‘@hide’ tags in the NFC java classes. The @hide tag is used to mark public APIs that are not to be exported in the SDK. This is used by the Android team to have APIs accessible across packages without having them available to applications. APIs marked with @hide are considered private to the Android platform and can change at any time, so you cannot rely on them.” He went on to note that indeed they “can confirm that there is some extended NFC functionality hidden in Android 2.3 that can be accessed… [the code he demonstrates] will work as long as you use a tag pre-formatted with any NFC Forum type tag with default public keys.”

Wowie! It’s always nice to be able to go both ways in a bit of operating system functionality. I remember way back in my day when it was amazing that you could create a QR-Code as well as read it. I think that was… last year that came to Android?