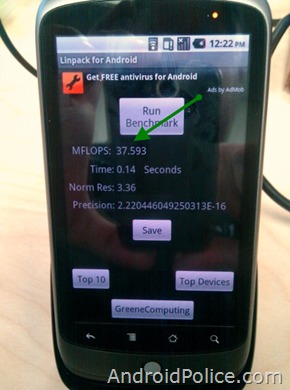 The guys over at AndroidPolice claim to have a Nexus One running Android 2.2. They conducted a few performance tests on the device and the result was astounding. The Nexus One will run up to 450% faster than it does on 2.1. When you take into account that the Nexus One already could be the fastest phone on the market now, more than quadruple the speed and you will have a true “Super phone” on your hands. If this is true, Google use of that term will be cemented after the release of Froyo.

By now we’ve all seen Flash 10.1 running on a Nexus One outfitted with 2.2. It appears the real reason why apple didn’t want Flash on the iPhone is because it couldn’t handle it, Android after Froyo has more than enough horse power to shoulder the load of running Flash. A few other things that are rumored to be included in 2.2 are the ability to save apps to the SD card and the introduction of JIT.

These gains in performance can be directly connected to the implementation of JIT. The Nexus One running Android 2.1 without JIT gets about 6.5-7 MFLOPS. And the same device running 2.2 with JIT enabled gets a whopping 37.5 MFLOPS. That’s over four times the performance and that’s crazy. Google is keeping 2.2 under tight wraps, usually by now we would have a leak, we’re going to have to wait for the I/O this time around. Check out the results over at AndroidPolice, they have some very interesting stuff there.