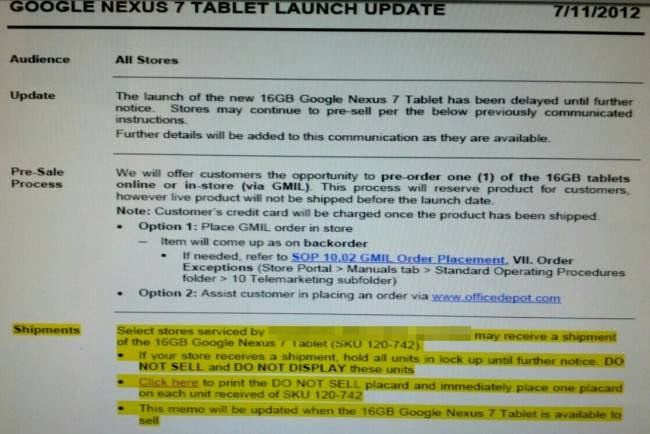 Sad news to report if you were planning on picking a Google Nexus 7 tomorrow, as Office Depot stores have been instructed to hold on to any stock they has received. We originally thought that the Nexus 7 might be going on sale in some places as early as tomorrow, but since this memo to Office Depot employees has been made public, it seems that the rumored July 12 launch is no longer in the cards. Even worse is the fact that the memo says the sale of the Nexus 7 has been delayed “until further notice.”

As scary as that might sound, we have a feeling that the launch of the Nexus 7 might still be coming up pretty quickly. Office Depot has obviously received stock (that is, assuming the memo posted above is real), and according to Droid Life, Staples and GameStop may have already received some stock as well. So, it’s possible that Google is simply asking retailers to hold back on selling the stock have for a few more days so more retailers have time to receive stock of their own. Alternatively, Google may be telling retailers to wait so those who pre-ordered can get their tablets first.

Really though, with no official information to go on in this case, anything is a possibility. Of course, if all of this turns out to be true and retailers do have stock that they’re being asked to hold back, the chances are pretty high that some Nexus 7s will be sold tomorrow anyway. As we said, with so many rumors floating around it’s hard to know what’s going on, but don’t be surprised to hear of an official Nexus 7 launch sooner rather than later.