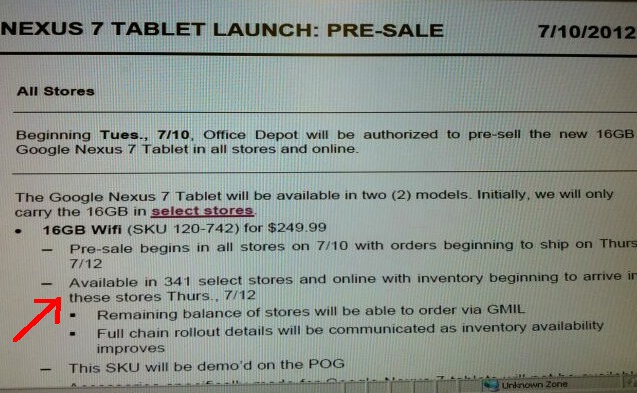 Google’s new Nexus 7 tablet is causing quite a stir from potential buyers. With such an awesome tablet for a low price everyone seems to want one. While earlier today the Play Store changed the “expected ship date” from 3-4 weeks to 1-2 weeks, we are now seeing more than one retail store suggesting it will be available on Thursday.

Last week Staples claimed the device would start shipping between the 12th and 17th of July, and now according to Office Depot the Nexus 7 tablet will be “in stores” and available for purchase Thursday, July 12th. The folks from Droid-Life received this anonymous tip. 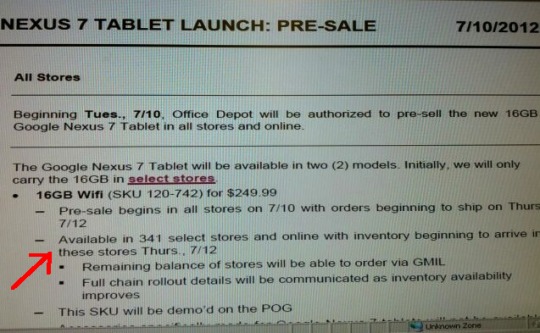 Staples is already taking pre-orders just like the Google Play Store has been, and now Office Depot is stating they’ll start accepting pre-orders today (although you can’t order online for now.) They go as far as to say over 341 stores nationwide will receive shipments by the 12th. Pre-orders will also start shipping on the 12th from the Depot, so we can expect in store availability on the same day or coming soon. Hopefully Google ships units to those who pre-ordered from them before they start selling the tablet in stores, or that would just be rude.

While none of these retail store sightings can be completely accurate, it looks like these tablets should start flying off the shelves later this week — or we hope so at least. We’ll be sure to update once we see or hear any further details. Check out our review and past coverage of the Nexus 7 below.