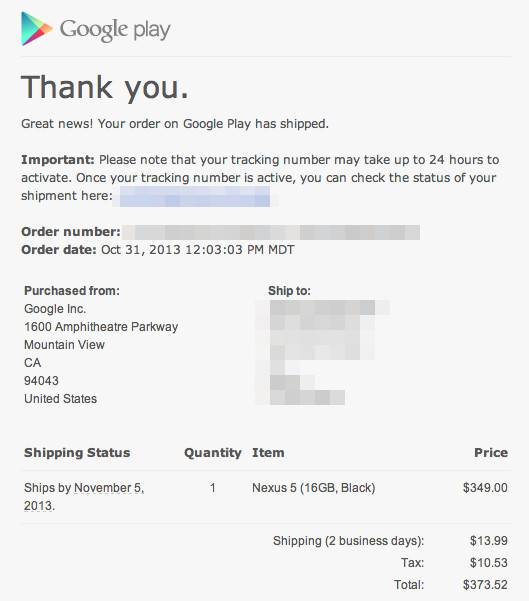 Standing in almost pointed difference from the debacle last year, the Play Store has handled the crush of Nexus 5 orders remarkably well. Thought the device sold out in about 30 minutes, some orders have started going out already! That’s right, orders which we’re placed mere hours ago have begun leaving the Play Store warehouse, bound for destinations unknown (to us).

This is excellent news, as last year brought us nothing but headaches and heartache. Orders were dropped, carts were emptied, and the Play Store shut down. Customer service was unreachable, and fairly snarky if you did end up speaking to someone. It was a lot of pressure, and to be quite honest, they handled it poorly.

The Nexus 5 launch may have been designed to alleviate some of that crush we saw last year, though. It was gently slipped into the Play Store, and announced via a blog entry. There was no event, no announced launch on the Play Store, and F5 keys remained intact. All in all, this went remarkably smooth, and same-day order fulfillment is the feather in their cap.

If you were lucky enough to get an order in, don’t get too excited yet. Even with two-day shipping, you won’t see the device until Monday. With that, we can commend Google on a successful launch of a Nexus phone. Ordering was easy, there was no massive Google Wallet failure, and the Play Store information was timely and accurate. Good job, Google.
VIA: Droid Life