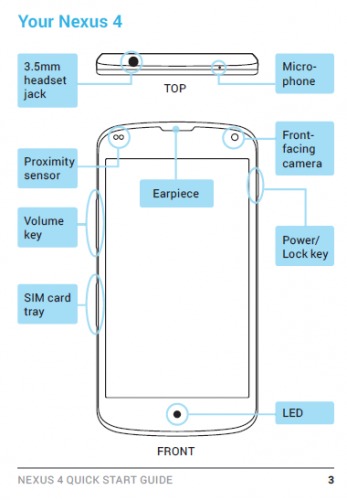 Today, we’re hearing the sad news that Google has opted (smartly) to cancel its Android event in New York City on Monday due to the fact that Hurricane Sandy will probably be bearing down on the city around that time. While that decision is definitely for the best, it means that we’ll have to wait until sometime later on for all of these rumored devices, including the LG Nexus 4, to get revealed. Today we’re finding out that when the Nexus 4 is revealed, however, it’ll come in 8GB and 16GB varieties, thanks to a couple of LG E960 manuals that have popped up on the Web.

Spotted by Engadget, the support page that was posted to LG’s UK and Australian websites has since been taken down (looks like someone made a boo-boo!), but the PDF quick start manual for the LG Nexus 4 still remains. Not only do these support resources confirm the name of the Nexus 4 yet again, but they also show that 8GB and 16GB models will be offered. You might want to take a look at that 16GB model too, since diagrams in the quick start guide confirm that the Nexus 4 will be lacking a microSD slot once it arrives.

Of course, that’s nothing new – Google has never really been a fan of microSD slots on Nexus devices, so why should the Nexus 4 be any different? We’ve heard a lot about the Nexus 4 in the lead up to this eventual reveal, and it’s said to include a quad-core Qualcomm APQ8064 Snapdragon processor clocked at 1.5GHz, along with 2GB of RAM and a 4.7-inch display running at 1280 x 768 resolution. Those certainly aren’t bad specs, but what’s really exciting about this new phone is that it could be the first device running Android 4.2 Jelly Bean.

Unfortunately, we’ll have to wait a while longer before we get to see Google pull the veil off this long-rumored handset. We’re also expecting the Samsung Nexus 10 and a new Nexus 7 model with 32GB of storage to show up during the event, so it should be a good one when the big G finally gets the chance to host it. Stay tuned, as we’ll have more information for you right here at Android Community!