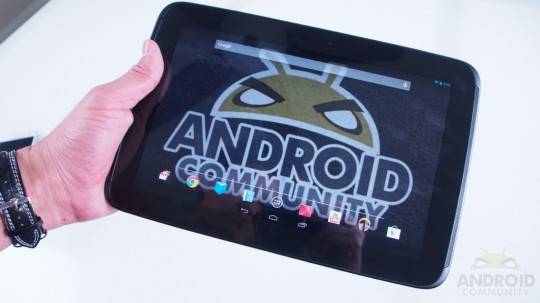 Google talked about Android 4.3 and the Chromecast dongle yesterday (as well as several other smaller items), however when it came to tablets the talk was about the Nexus 7. Of course, that is only one of the two tablets currently available by way of the Google Play Store. That other is the Nexus 10 and the lack of a mention yesterday seems to have caused some to worry about the future of the 10-inch device.

Arriving as a bit of good news for those who may have been worried, Google’s Sundar Pichai has confirmed that a new Nexus 10 is in the works. The details are on the light side and are coming by way of the Twitter account of WSJ reporter Amir Efrati. That tweet simply mentioned that a new 10-inch Nexus 10 was coming from Samsung.

It was also said the tablet will be arriving in the “near future.” But as we often see — the definition of near future can vary widely from person to person. That being the case, those who happen to be fans of the 10-inch form factor can at least take comfort in knowing a refresh is in the works. Quite possibly we can hope for an announcement in the fall.

As to what we can expect to see remains uncertain though. Based on what we saw with the Nexus 7 and one could speculate improvements in terms of the processor and display. The current Nexus 10 is sporting a display resolution of 2560 x 1600 and remains available for $399 (16GB) or $499 (32GB) from the Google Play Store. And while we aren’t sure we would suggest making a purchase now, the tablet remains a solid device — and happens to be one that we reviewed back when it was originally released.