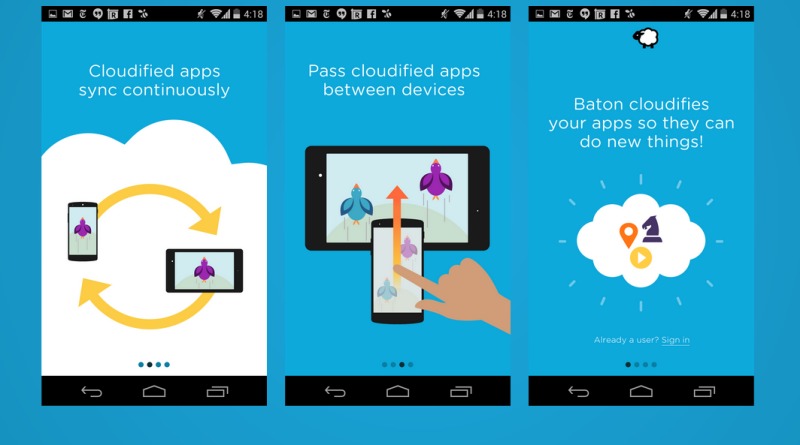 When you have multiple mobile devices, languishing batteries aren’t your only concern. Keeping your apps and their data in sync across all those devices is always a pain in one’s extremities. Some apps can manage that for you, but not all of them. Google has app backups and syncing, but not all Android apps partake of that either. Fortunately, a solution might just be around the corner in the form of Nextbit’s Baton. And it will be available in beta as a Cyanogen exclusive.

Baton’s purpose is so simple that it’s a wonder no one has thought of it before. Or perhaps it’s because it was too simple, and potentially too dangerous that one dared approach it without the proper credentials. Nextbit’s credentials come from the startup’s two founders, former Google execs Tom Moss and Mike Chan. They were also able to rope in former HTC SVP for Design and User Experience Scott Croyle.

Baton is more than just a backup and restore service like Google’s built-in feature, though it certainly does that as well. It offers app and data syncing across all connected devices, and it isn’t picky about which apps to sync. It also does more than just sync plain data, it also manages states. The most interesting feature, which also give the product its name, is the “Pass” feature, which lets you send any open app and its state from one device to another. Think of it like Amazon’s WhisperSync, except it works across devices and for any app.

Enticing and totally useful as it may sound, there will most likely be some worried looks, especially since it stores everything in the cloud. Nextbit’s cloud, that is. And that always brings in privacy and security concerns, especially when all app data is involved. We can only presume and hope on Nextbit’s abilities and purpose, and they might be on the right track by partnering with Cyanogen, Inc. The private beta of Baton will be exclusively available on CyanogenMod, while future public releases will be available on the “commercially distributed Cyanogen operating system.”

That last bit is equally interesting, though tangential to the announcement. Cyanogen, Inc, the company, has never been lacking in ambition, but this is one of the few, if not the first, times it referred to a Cyanogen Operating System. And judging by the wording, it seems that it will be a separate entity from the CyanogenMod we all know. Whether that refers to something that already exists, like CyanogenMod 11S on the OnePlus One, or a product that is yet to come is something we have yet to find out.