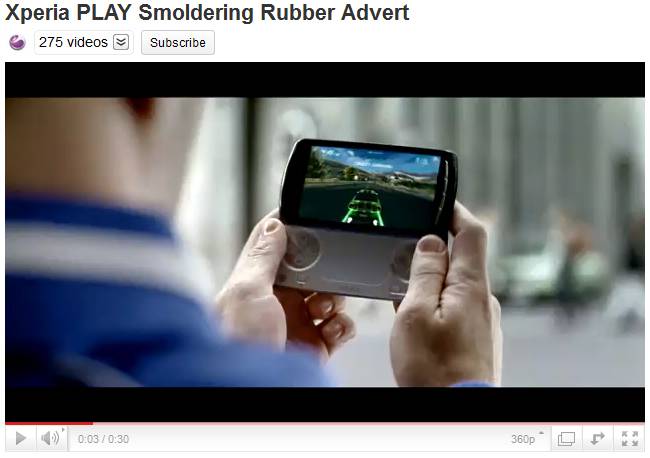 Sony-Ericsson has released a pair of games which showcases the anytime game playing ability of the Xperia Play. In the videos, the central character is waiting at a bus stop and a restaurant, and having time to kill, he whips out his Xperia Play. Suddenly, a rather sweet looking Mustang 351 comes flying down the street, sending pedestrians running for their lives. And it looks like our hero is controlling it with his Play controls. Then, the car loses control and crashes into a brick wall. He winces, and takes a call. The commercial ends with the `Stang flying over the bus. Then there’s the second …

The second is the same guy at the restaurant. He pulls out the Play and suddenly the restaurant gets attacked by a laser wielding UFO, destroying tables and sending patrons hiding for cover. Windows shatter, dishes fly, explosions. Then a call and it’s all back to normal, the alien craft seemingly crashing into a distant hillside.

What I like about both spots is that it focuses on the experience, and not the quirky personality of the person playing the game, like the previous campaign. Not that the commercials featuring Kristen Schaal were bad. They were actually quite entertaining. But the new campaign puts the Play in its element and helps consumers imagine the possibilities. Check em out:

And you can check out Slash Gear’s review of the Xperia Play here.