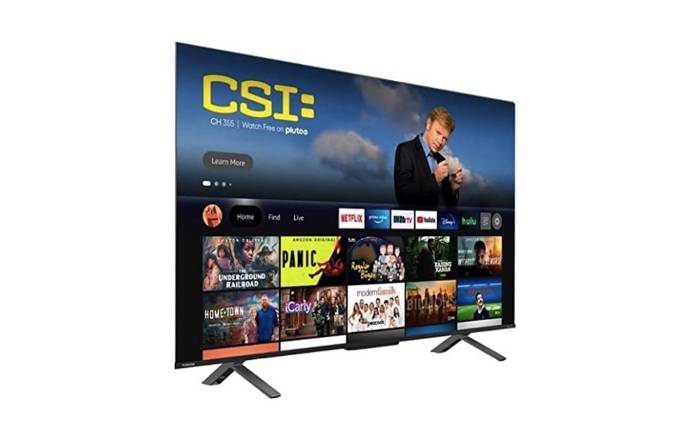 Toshiba has entered the smart TV industry although we don’t hear much about the products. In 2018, we remember saying Best Buy would be releasing Fire TV editions by Insignia and Toshiba. That happened after Toshiba released a Alexa-powered six-in-one Symbio Smart Home Solution. In the next few years, more developments have been introduced. Just in August, we learned about the Amazon Insignia F50 Series Fire TVs. This week, a new Toshiba Fire TV with Alexa is announced and ready for purchase.

The new Toshiba 55-inch Class M550 Series LED 4K UHD Smart Fire TV is now listed on Amazon. It’s hands-free with Alexa and is ready to be an entertainment powerhouse with its many features.

The smart TV comes with HDR10 and Dolby Vision HDR. You don’t even have to use a remote control because Alexa will do the work for you. Simply use your voice to command the TV.

With the Toshiba Fire TV, you can view most of your content on the screen. Take advantage of the streaming channels, over-the-air TV, and your favorite apps.

The smart TV also offers a 480 Motion Rate for a clearer and smoother display. For gaming, there is the Auto Low Latency Game Mode you can enjoy. There may be little or no noticeable input lag whatever gaming console you use with the TV.

The Regza Engine 4K is the one responsible for the high performance of Toshiba. The ultra 4K resolution offers excellent picture quality. Price of the 55-inch TV starts at $799. There is also the 65- and 75-inch options for $999 and $1,199, respectively.