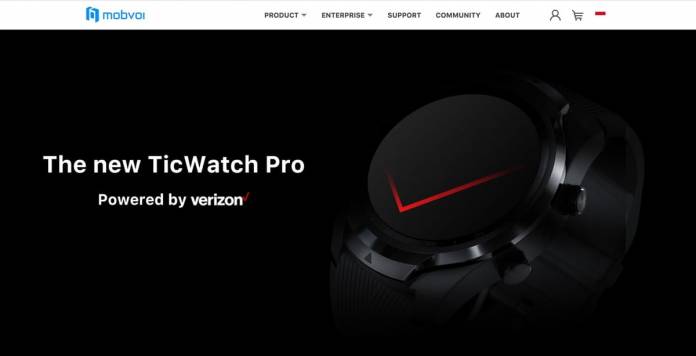 What does it say about a brand if they are the ones who leak their own upcoming product? Well it’s either an honest mistake (where someone may get a memo) or that’s really their marketing effort to get people talking about it. In any case, the folks over at Mobvoi got their wish as a “leaked” image of an upcoming “new” TicWatch Pro showed up on their website. While it has since been taken down, the Internet of course never forgets (and always screencaps).

Digital Trends spotted the landing page on Mobvoi’s own website and were able to immediately grab a screenshot before it was eventually taken down. The image showed a familiar smartwatch since the TicWatch Pro has been around since last year. But the caption says it’s a “new” device and it is powered by Verizon. So what everyone is assuming is that this version comes with 4G LTE connection.

This means that you will be able to make calls, send texts, and all the other things you can do on a smartwatch. But this time, you don’t need to have your connected smartphone with you, nearby, since your watch will have its own connectivity. This also means you’ll have to have a data-only connected device plan through Verizon.

What is not clear at this point is if the only thing new with the TicWatch Pro is its 4G connection or if there’s a new version that also has better specs than the original one that was released last year. The image shows it’s almost the same, although there may be an additional chamfered bezel around the screen. It’s still as big and thick as the previous version though.

We’re also not sure when this new smartwatch will be released. It will probably be more expensive than the $250 TicWatch Pro from last year given its 4G LTE capability.