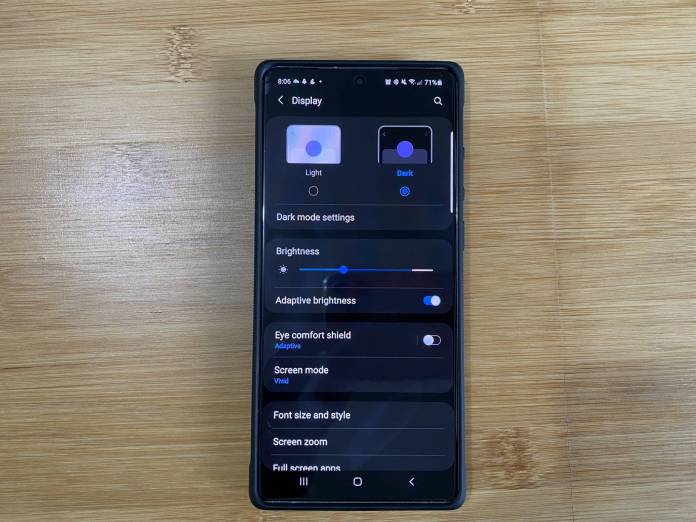 There was a time when consumers were clamoring for dark mode for all the apps and devices out there. Now that most of them have that option already, researchers are taking another look at it to see if it does have actual benefits, particularly for a device’s battery life. A new study is saying that specific scenarios when dark mode is turned on will not really give you a lot of efficiency and battery life gains despite what people initially thought.

Android Authority shares a study from Purdue University researchers that show that switching to dark mode doesn’t really make a big difference in power consumption. Well, this is actually in fairly specific but typical usage. Most people use auto-brightness settings when indoors at around 30-40% brightness. So switching from those settings to dark mode will only save you 3-9% on average. Logically, the power savings will go up if you switch from light mode with 100% brightness to dark mode, saving you 39-47% of your juice.

The study tested out six apps – Calculator, Google Calendar, Google Maps, Google News, Google Phone, and YouTube – and tested them out on the Pixel 2, Pixel 4, Pixel 5, and Moto Z3. They used a tool they developed called Per-Frame OLED Power Profiler (PFOP) that saw how dark mode affected a minute of activity for each of the apps. The study also said that Android’s battery consumption functionality actually doesn’t look at dark mode when calculating an app’s power consumption.

While the results seem to be logical, it’s interesting to see just how little you actually save on your battery consumption when you switch from low-to-mid brightness to dark mode. But it would also be interesting to note if battery saving is actually a major reason for users to switch to dark mode. There may be those that would just prefer to use dark mode for brightness or aesthetic reasons rather than energy-saving purposes.

Android Authority says that maybe it would also be interesting to see the test using brightness measurement for each device as there are devices that have brighter screens. In any case, we may see some more studies on dark mode since this is almost a common feature for apps and devices nowadays.