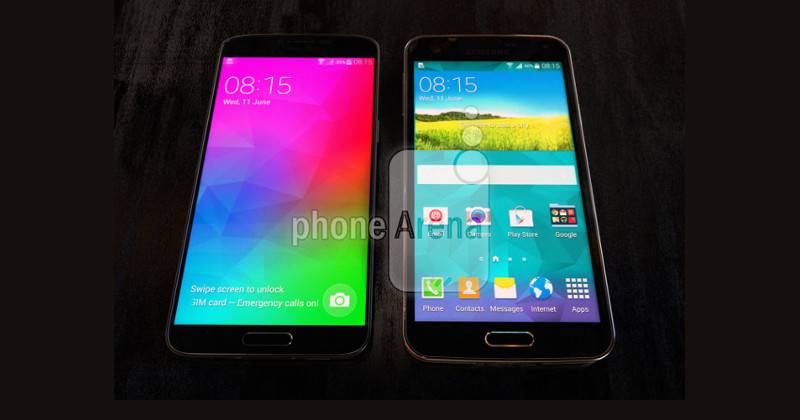 Whoever has gotten his hands on the unreleased Samsung Galaxy F – previously known as the S5 Prime – has been putting out more and more pictures of the rumored new premium-looking smartphone unit, quite possibly both to tease and torment tech aficionados and Samsung fans all over the world. This newly released image is no different, this time with its display turned on and pictured beside the current Samsung flagship, the Galaxy S5 – showing those thin and sexy bezels for everyone to see.

Barring an elaborate hoax – especially since this rumored beast was a no-show at the Premiere 2014 event today where they unveiled the Galaxy Tab S – Samsung will find itself together with makers LG and Sharp, putting out devices with extremely thin bezels. Think about what LG has been doing with its new units like the G2 and the G3, and Sharp’s Aquos 304SH – the latter being water-resistant and dust-proof in addition to having those razor-thin bezels. Will Samsung go that way as well with the Galaxy F? It actually would be dandy if we could find that out.

The Galaxy S5, seen here with our unreleased teaser, already sports a 5.1-inch screen. The Galaxy F will probably be having a slightly bigger screen at 5.3 inches, but this all due to those super slim bezels and not because of an increase in the general unit size. The Galaxy S5 still is in the “joy to hold and handle” category because Samsung made sure that it remains in a form factor that is both handy but can handle a high-definition screen size. The Galaxy F, compared now to the flagship phone as the picture taker has obviously wants us to, shows no visible size increase from the S5 form factor.

Rumors about the design of the Galaxy F say that it will be having a metal finish, or at least Samsung users would like to hope so, the company’s fetish for plastic notwithstanding. The leaked 5.3-inch display is hoped to have a resolution of 2560×1440, powered hopefully buy the Snapdragon 805. There is some talk of a generous 3GB RAM allocation and a 16 MP rear camera. We say take these rumors with a lot of salt, although like you guys, we understand that it is nice to dream. We will still have to wait if Samsung puts substance where their leaks are.