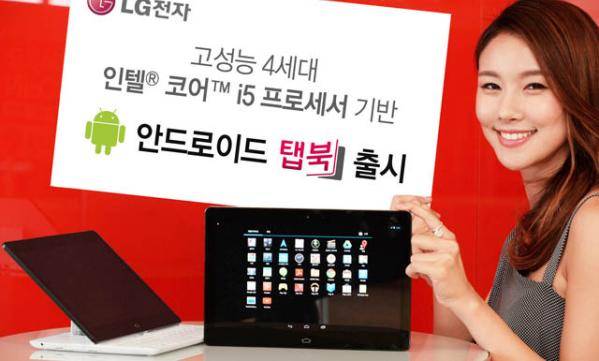 LG may not put out much Android tablets in the market, but when it does, it tries to make it into something truly distinct. This new LG Tab Book model that the company has unveiled in Korea will not only be one of the biggest Android tablets you might get to see, it is also probably one of the most powerful, running on an Intel Haswell Core i5 CPU.

The 11.6-inch LG Tab Book might be smaller than Samsung’s largest beats, which measure up to 12.2 inches, but it surpasses those in almost every aspect except weight, since this LG device measures just a bit over 1 kg. That’s not surprising though, since this Tab Book is a 2-in-1 device, meaning that it has a sliding mechanism that converts it from tablet to a laptop, at least at a certain angle. At least the keyboard is built-in so you won’t have to carry around a separate one. Those more familiar with LG’s products outside the Android world might recognize the company’s previous Tab Book models. But while those run on Windows 8, and on a previous generation Intel Core, this one, model 11TA740-GA50K to be exact, runs on Android.

Despite the size, the tablet only manages to reach a 1920×1080 pixel resolution. But perhaps the most interesting aspect to this device is how beefy it is in terms of raw power. A fourth generation Core i5 4200U, running at 2.6 GHz, an Intel HD Graphics 4400 CPU, 4 GB of RAM, and a generous serving of SSD at 128 GB, this tablet hybrid is pretty much laptop-grade. Or, alternatively, an Android tablet on steroids. While we definitely don’t mind handing over to Android some heavy-duty hardware, one could perhaps wonder to what purpose they could be put to good use for a resource-efficient OS like Android.

LG has not yet released any pricing or availability details for this Tab Book, but existing models ran from around $1,900. While Android tablets usually run for much lower price tags, the beefed up specs on this one could mean it will be priced roughly the same, if not close. One other thing that does mar this otherwise interesting piece of Android slab is the fact that it will only be running Android 4.2.2., which probably means that key software features that has made devices like the LG G3 or the latest batch of G Pad tablets quite interesting won’t be making its way to this overpowered hybrid.