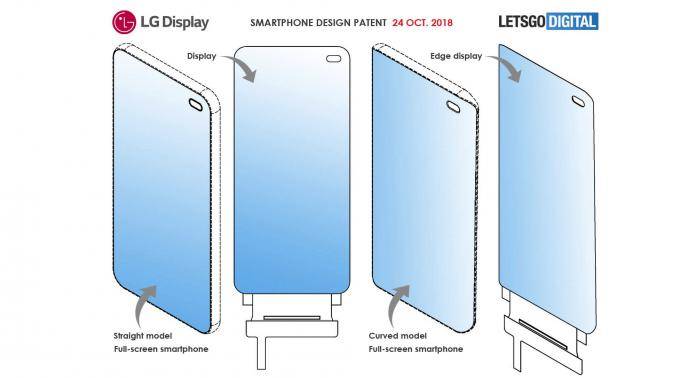 LG isn’t giving up. No, not yet. The mobile group of the other South Korean tech giant still remains in the business. It changed its marketing strategies earlier this year and we believe more innovations and new technologies will be introduced by the firm in the coming year. We’re looking at possibly an in-display fingerprint sensor, a foldable phone, or a device with a truly fullscreen display. If not fullscreen then maybe just almost bezel-less. Recently, a series of smartphone design patents were filed by LG with the Korean Intellectual Property Office (KIPO) that shows a different kind of Edge display.

A patent was also filed by LG that includes a phone with a camera under the display. It already sounds like a standard but this one refers to two different phone designs that come with a borderless screen.

Looking at the patent illustrations, we see a device with a display slightly slanted on the right. The left is noticeably thinner.

Meanwhile, the second phone shows a straight model with rounded corners. Both devices seem to each have a flexible display. There is a hole for the selfie front-facing camera which we assume can be placed in other positions.

For this particular patent file, we think an under-display camera will allow the totally full screen smartphone just like what Samsung and Oppo are planning. We don’t think LG will venture into the slider design anytime soon. A foldable phone is being developed already and this is something LG can introduce earlier than Samsung.