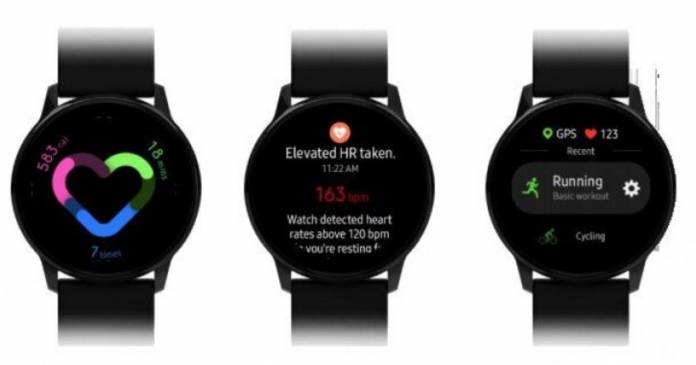 Yesterday we had some renders “confirming” that the upcoming Samsung Galaxy Active Watch will indeed not have a bezel ring anymore, unlike previous Samsung smartwatches. Since we’re a few days away from finding out whether or not all these leaks and rumors are true, we now have even newer renders, this time showing off what the watches would look like running on the new One UI and they look pretty great. It also makes sense that they got rid of the rotating bezel since this UI is more for swiping.

Based on these renders, it looks like the upcoming smartwatch would be heavy on the activity tracking. It even puts goals front and center in some of the watchfaces shown. This also matches with the previous rumors that the Galaxy Watch Active will be able to recognize more types of activity and you won’t have to initialize a workout as it will track it automatically.

The UI is generally fresh and clean as well and because it has a predominantly dark background, it makes your device look more “posh” and high-end. But the even better news is that since it uses less white light and space and you have an OLED screen, then you’ll be able to save your battery life. There is also a continuous heart rate feature that will let you know if there are abnormalities in your heart rate.

Other specs that we’ve previously seen about the Galaxy Watch Active include that it will have a 1.1-inch 360x360px AMOLED display and will be powered by a dual-core Exynos 9110 chip. It will have 768MB RAM, 4GB of internal storage, and a 236mAh battery.

If the rumors are indeed true then we’ll know all about this new smartwatch at the Samsung Unpacked event happening on February 20. They’re streaming it live so you can check for yourself whether or not these are all true.