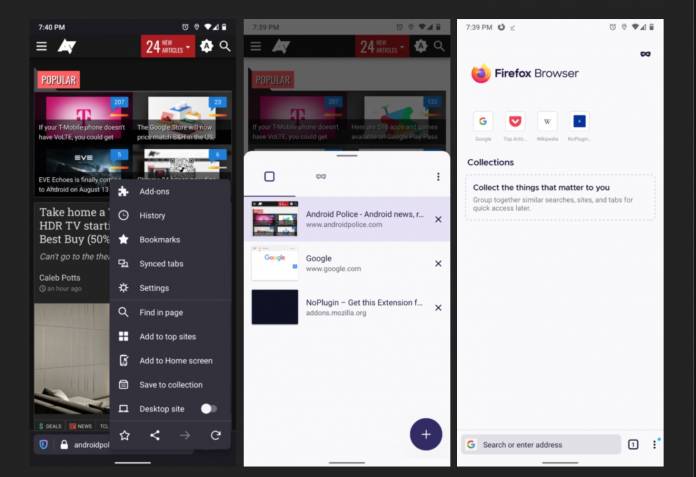 After more than a year of previews and beta testing, the stable version of the Firefox for Android browser is finally rolling out to some users. This is a welcome change of course since the last significant update was back in July 2019 and in the app world, that is a long time. However, it seems that the stable version is still missing a few significant things, including limited support for extensions. Hopefully, this is just the first phase and we’ll get an even improved update later on.

Of course, this updated version is a huge improvement from the browser that we’ve been using for the past year or so. For one thing, the interface looks more “modern”. It also has a bottom bar, an updated engine to improve its performance, and more privacy options. You also get tab groups called Collections, support for the much-requested dark mode, and other changes that we’ve been seeing in the beta version.

But according to Android Police, one thing that’s missing from the new codebase for the browser is support for extensions. You will only be able to install nine extensions, even though there are actually thousands of extensions in their add-ons repository. We’re not sure at this point if they will be expanding it later on or if this is it, but the only extensions you can install are:

For now, Developers will not be able to update their extensions unless they partner with Mozilla first. There may be some hope though as they said that more extensions might be available soon and they might have some positive updates soon. They also said that because of the “limited UI”, they only support “a handful of native themes”.

This is of course disappointing as we have been waiting for the stable version for a long time. Also, the idea was to roll out the new browser until the new codebase has some sort of parity with it so limiting extensions seems like a step back.