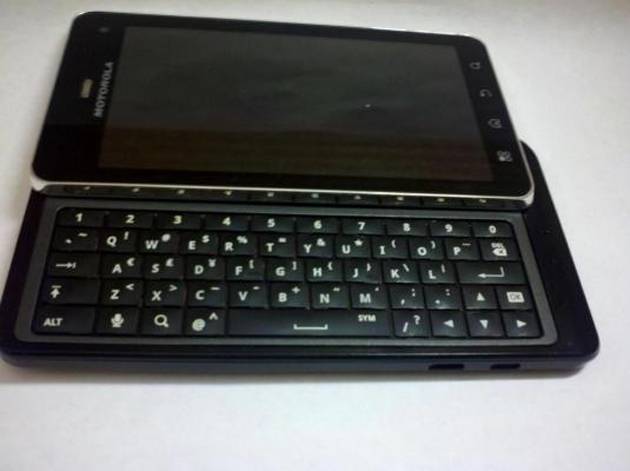 With all the sequels coming out, one couldn’t be blamed for confusing a list of phones coming out this summer with a list of summer blockbusters. This particular upgrade happens to be the Motorola Droid 3 for Verizon. More exciting an upgrade from the Droid 2, then the 2 was from the original Droid. The third iteration is shaping up to bring the original Droid line back into the forefront of Android superphones when it is released this June.

A tipster has been able to confirm a few of the rumors that have been swirling about this phone as well as that the launch date will fall in June. First of all, as can be seen in the images of this phone that have been leaked, a full extra row is being added to the keyboard, to act as a dedicated number row. The biggest confirmation was that the screen will indeed be a qHD 4″ screen, presumably the same as the screen on the Motorola Atrix 4G, and while the phone is confirmed to have one of those new-fangled dual core processors, we still don’t know if it’s Tegra, or Texas Instrument’s latest OMAP processor (The original 2 Droids were both powered by single core TI OMAP processors).

One upping it’s X2 cousin, this numbered Droid will be the first Motorola Droid phone to feature a front-facing camera. The phone will unfortunately be LTE-less though. While hardly a surprise given the issues we’ve been hearing about regarding the Droid Bionic, what was supposed to be Motorola’s first LTE phone, it’s a little disappointing when nearly everything that moves is having 4G slapped on the end of its name. Ignoring that phones don’t move, we continue on…