It’s been a productive year for BlackBerry. The brand hasn’t given up on the mobile industry. The smartphone pioneer may not be exactly selling the most popular devices right now but it has remained in the business.

After the KEYOne, a new BlackBerry phone is expected to enter the mobile market. We don’t know what to call it yet but benchmarked on Geekbench is a new device called as QUALCOMM BBF100-1. It is only a codename but we can say it’s a BlackBerry Android phone because of the BB reference. We know the KEYOne and the Motion were earlier listed as BBB100-X and BBD-100-X, respectively, so this new BB device may be the next model.

Almost same time last year, information about a BlackBerry Mercury started to float. We’re expecting this mystery phone will be the KEYOne’s successor. The initial specs are impressive: 6GB RAM, 1620 x 1080 pixel resolution, QWERTY keyboard, and a Qualcomm Snapdragon 660 processor. This means the phone will be powerful even if just a mid-ranger. We’re also assuming it will already run Android 8.0 Oreo out of the box since BlackBerry is always ready with the latest OS version.

Can we say it’s the BlackBerry KEYTwo? Maybe. We won’t mind a different name but this may be easier to remember. 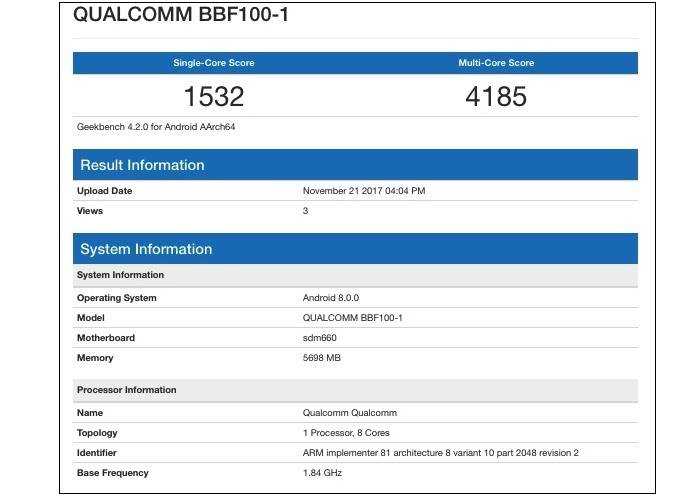