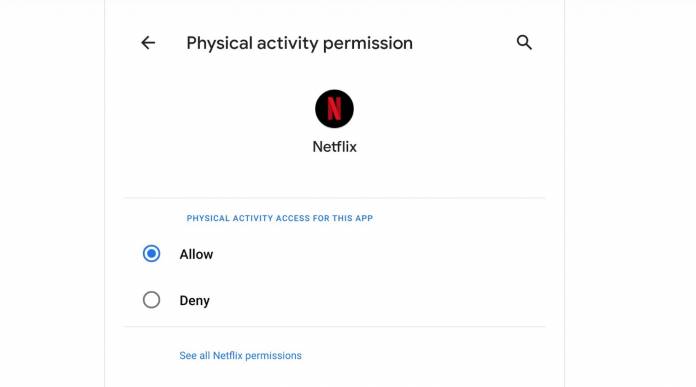 If you’ve noticed that your Netflix app suddenly is requesting to access your physical activity sensors, or worse, it just automatically does, you’re not alone. Some users started noticing this “strange” behavior from the video streaming app but apparently, it’s a test that they’re doing to better improve the video playback quality. It seems to be a random test that they’re doing but is probably targeting those running Android Q beta because of the activity recognition permission which you’ll find in the upcoming update.

An article on The Next Web shared how a security researcher tweeted out that his Netflix app was requesting permission for physical activity data. And then a writer for the online site realized that the permission was actually turned on without any prompt from the app. When contacted, Netflix admitted that this was part of a test they were doing “to give our members a better experience”. It allows them to adjust the playback quality when the user is “on the go”.

But does anyone really watch Netflix while they’re walking? They don’t and they shouldn’t as it will cause distractions or even accidents. But it’s possible that some do watch their favorite TV shows or movies while on the treadmill or the stationary bike, which Android Q will supposedly be able to detect with the physical activity permission. But as to how what you’re doing will affect the video quality, that they didn’t explain. It will probably to help the video “not skip” when you’re on the move or something like that.

What they did say is that only selected accounts are part of this test and right now, they don’t have any plans to roll this out to all the users anytime soon. But the fact that they’re testing it out means they may eventually do so if the results of this selective testing are favorable and probably if no one raises an alarm over security issues of granting a video streaming service access to your physical activity permissions.

If they do change their mind about rolling out an update for all users that are running Android Q beta and eventually the stable version, we’ll keep you informed.