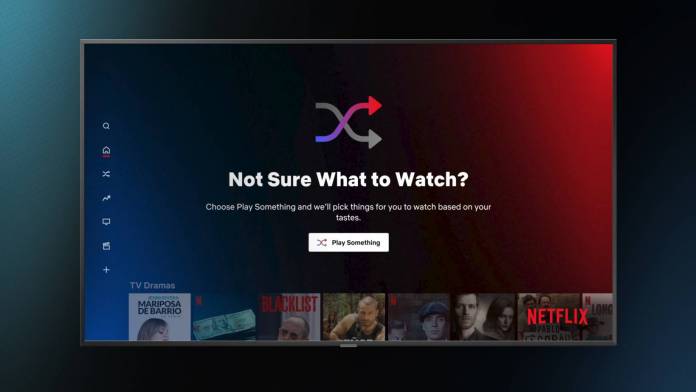 Netflix previously shared that they were bringing a tool that will help its users who sometimes mindlessly scroll through the entire library without actually watching anything. Now the “Play Something” feature is available for the Netflix app on smart TVs and probably eventually, Android mobile devices as well. This tool is more like a “shuffle button” for the app but it’s based on movies or TV shows that you’ve previously consumed and which they think you’ll like based on the platform’s algorithm.

Unless you know specifically what you want to watch, you’ve probably experienced spending more than half an hour just scrolling through Netflix, undecided what you want to watch. Now if you don’t want making any decisions, just tap on the “Play Something” button and Netflix will load up a series or a movie that will be based on your previously watched content. The streaming giant has a pretty good algorithm so what they will suggest will probably be in your wheelhouse.

But if you’re still not satisfied, there’s another button: Play Something Else. This will give you either a new series or movie, an episode of a show you’re already watching, a movie that you’ve already started, a series or film that’s already on your watchlist, or something that you haven’t finished yet and they think you’ll want to revisit. If you’re still not happy with that, well you’ll probably have to go back to mindlessly scrolling.

The Play Something feature will be seen in several places on the Netflix app. You will see it underneath your profile name, on the tenth row of the Netflix homepage, and on the navigation menu on the left of the screen. If you’re using a screen reader, it also supports Text-to-Speech (TTS). If you don’t know how to enable that, you can get help from the Accessibility center to find out how you can enable this on your smart TV.

For now, Play Something is only available on the Netflix app on your smart TV. They have not yet said when it will roll out to the mobile app but it will most likely not be available on the desktop browser interface.