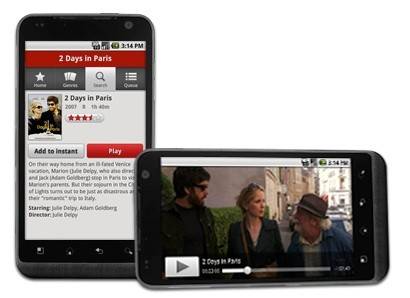 Well, what do we have here. It looks like the LG Revolution wont be getting Netflix for Android first after all. Even though it is the featured phone on the Netflix websites Android section. Today Netflix has announced that they are now offering Netflix for Android coming to select HTC phones, as well as the popular Nexus S. I’m sure they’ve worked with Google so the S should have been in the list to begin with.

Today they have begun the rollout of Netflix for Android, and that is their words. Hopefully a larger list of compatible devices will be added very soon. Currently they are only listing the HTC Nexus One, the Incredible, EVO 4G, G2 and the Nexus S like I mentioned above. They do list specific Android versions with each phone so that may be an issue, we will look into that. They list 2.2 and 2.3 for the Nexus One, but only 2.2 for the EVO and many users are on 2.3 with leaks or custom roms.

They do mention they plan to add to the list of supported devices rapidly, so that is good to hear. Hopefully sooner than later. For those that have a Netflix account and a supported device the Netflix Android App is available in the Android Market now, get it here. Obviously this is the first release for Android so the app doesn’t have a lot of functionality. Stop and start playback, start from where you left off on your TV, managing your instant queue and things of that sort. It is a good start and better late than never. Hopefully they will get to updating the device list, and features soon. iOS users of Netflix just got subtitles support, so hopefully many changes are coming soon. I think I’ll go watch some Daniel Tosh or Tosh.O now that I have Netflix for my Nexus One. Full Press Release below:

Hi, this is Roma De from the product team at Netflix.

We are thrilled to announce that we have begun to roll out a Netflix application for the Android platform. We are making the free app available for download from Android Market. The Market download will initially be available only on select phones that currently have the requisite playback support. We expect to quickly add to the number of phones that can download from Android Market as we work with ecosystem partners to expand playback support.

The Android platform is gaining rapid adoption in the mobile world and presents a great opportunity to reach more of our members. Because the platform has evolved so rapidly, there are some significant challenges associated with developing a streaming video application for this ecosystem. One of these challenges is the lack of standard streaming playback features that the Netflix application can use to gain broad penetration across all available Android phones. In the absence of standardization, we have to test each individual handset and launch only on those that can support playback. We are aggressively qualifying phones and look forward to expanding the list of phones on which the Netflix app will be supported. We anticipate that many of these technical challenges will be resolved in the coming months and that we will be able to provide a Netflix application that will work on a large majority of Android phones.