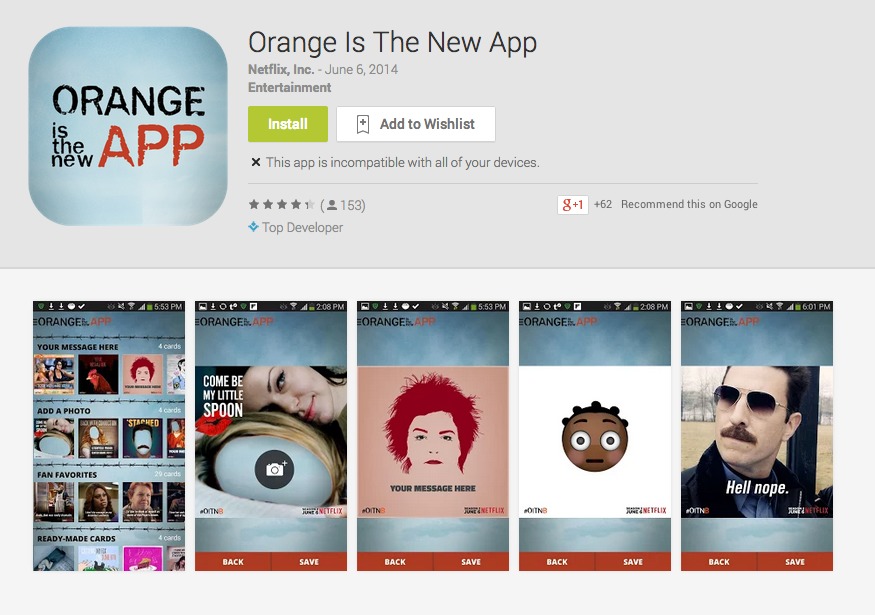 To make your mark in the increasingly crowded world of shows on network TV, cable and video streaming sites, a strong social media presence is not just needed but essential. Netflix has a commercial and critical hit on their hands with the prison dramedy Orange Is The New Black and now they are banking on their fan base to grow even more with the new app called, what else, Orange Is The New App.

Orange Is The New Black tells the story of a privileged, white, middle-class woman who goes to prison on a drug smuggling charge from her college days. She encounters a host of colourful and weird characters while locked up in the joint, showing viewers a world that is hilarious, existential, heartbreaking at times but never boring.

The new app, already available on Google Play Store, will allow you to create your own memes using different characters from the Litchfield prison. Although memes from the show are extremely popular online, at least if you make it from this app, it’s official. You can replace the face of a character with your own picture or just write your own messages over popular images from the show. And of course it has an easy share option for social networks like Facebook, Twitter, Instagram, messaging apps like WhatsApp and even SMS.

While the app has gained positive reviews on the Google Play store from the show’s fans, there were some comments that the images contain spoilers for the show’s second season. All episodes for the new season were made available on Netflix just last June 6.

Download “Orange is the New App” from Google Play Store