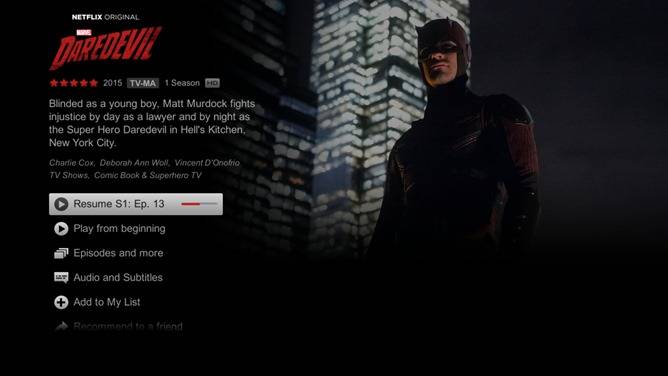 The new high-end TV industry standard, 4K, may not be that popular yet, given the limited devices that can support it (just for now, hopefully), but eventually, most brands will probably get on board. Netflix is making sure that they’re one of the first out the door, as their Android app now supports 4K ultra high density resolution so you can view “all the pixels”. The update also brings support for Dolby Digital Plus pass-through and application backgrounding as well.

The only problem with this is that it will only work with compatible hardware which is still very limited, and will only apply to shows offered in 4K resolution, which are also not that many yet. Some of Netflix’s original programs like House of Cards and Daredevil are in 4K, if you’re a subscriber to their $12 a month premium plan. But as for Android TV devices, the only one that is capable of 4K resolution isn’t even in the market yet. The NVIDIA Shield set-top box will be available later this month or early June. But the Nexus Player, the Razer Forge TV, and the ADT-1 are only up to 1080p. So the only way you can watch it through Android TV is through Sony’s high-end smart TVs, which aren’t technically Android TV devices.

The update also brings Dolby Digital Plus pass-through support where compatible devices can send surround sound through the TV’s HDMI then to a sound system receiver. The Netflix app also now has application backgrounding which means Android TV can continue playing content even behind the “leanback” homescreen.

The update to Netflix is rolling out to users. But if you’re impatient to have this 4K capability (and if you have the right equipment), you can download the APK.