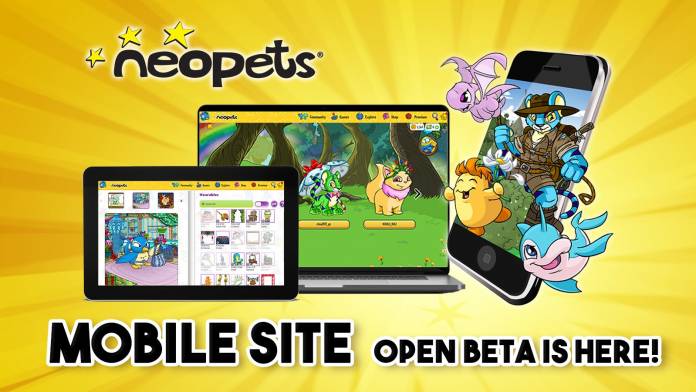 If you were playing games during the early 2000s, you may have played Neopets at one time or another. While the game isn’t as popular as it was back then, it never really went away. In fact, it had a pretty loyal niche following. Some even say that its mostly female fanbase credit the game for teaching them how to code. Now they’re going into a “new direction” as they have announced that they are launching a mobile-friendly site in beta mode.

If you were not playing games during the early 2000s and it’s the first time you’ve heard of Neopets, it was a popular game where you could create and then develop your own virtual pets by playing a lot of Flash games and going through all the different worlds available on the website. You could also meet other players and even make your pets friends and you could build forums and guilds to build those relationships.

Now they are letting fans take a look at the mobile site. While some would have wished out for a mobile app, we’re getting a mobile site. The developers say they haven’t brought the whole of Neopia over to the site just yet but it’s now open to those who want to explore what it would look like on a mobile device. You will have to log in to your account or if you don’t have one, you’ll have to create one to explore it.

If you don’t log in, you will only see the full version of the site which doesn’t look well on mobile. The mobile beta seems to be pretty similar to what you can see on the full version but modified for your smartphone or tablet. You have Community, Games, Explore, Shop, and Premium (in case you want to spend some real-life money). The Explore section seems to be the one not yet fully converted as it leads you to the “less-mobile-friendly lands of Neopia”.

Ready to see what we’ve got started for the new Neopets mobile-friendly site? We don’t have all of Neopia moved over yet, but we hope you enjoy the new direction of Neopets so far! Check out our open beta now!https://t.co/jl8buee3Qu pic.twitter.com/45IhoaLzaU

This isn’t the first time that Neopets went mobile. There was the Legends and Letters game that revived Neopets characters from the 2000s but it didn’t quite take off. Let’s see if this one does.