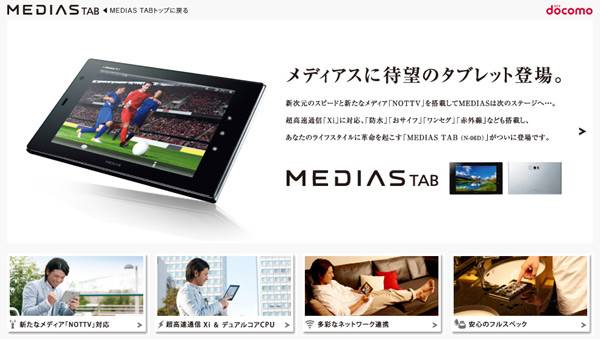 Another week, another Asian tablet that’s releaseing already behind the times. This time around it’s Japanese phone giant NEC, whose MEDIAS line is getting a tablet entry in the form of the 7-inch MEDIAS Tab N-06D. While the slate is kitted out to be a decent little tablet, it’s unaccountably running Gingerbread, despite a release date nearly five months after the release of Android 4.0 Ice Cream Sandwich. Good grief, guys, even Motorola is starting to work on ICS updates at this point.

The MEDIAS tablet gets a dual-core 1.2Ghz processor, dual cameras, an infrared control port for commanding home theater equipment, NFC, Bluetooth 4, front and rear cameras and it’s all packed into a body just under 10mm thick. The tablet also gets an integrated TV tuner and antenna, for use with the DMB digital TV networks in Japan. It’ll even have access to DoCoMo’s LTE network, making it quite the compelling little 7-inch tablet. There’s no word on price, but hardware wise, it keeps up with the best 7-inchers from more widely-spread manufacturers. Oh, and Gingerbread. For the love of Pete, it’s running Gingerbread.

There’s a video below. I don’t speak Japanese, but I imagine the speechless young ladies are thinking something along the lines of, “Wow, look how handsome and confident he is, despite using software that’s a year and a half out of date.”

C’mon, NEC. Two or three months ago I could understand – products have long development cycles, after all – but now? Google publishes the open-source code for not one, but two tablet-optimized operating systems, and you have to go and release a ghastly smartphone-tablet beast. There’s no word on an exact price, but given all those specs it’ll likely be way over the $200 mark, the unofficial point where a smartphone OS on a tablet device has become “acceptable”. Don’t count on seeing this one ever get out of Japan, just in case you were wondering.