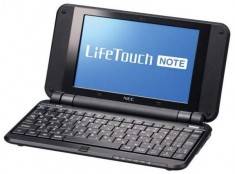 JKK Mobile has got a hands-on of the NEC TouchNote 7 inch Android laptop at Mobile Word Congress in Barcelona. Basic specs include being powered by an NVidia Tegra 2 chip, a 7″ resistance touch screen at 800×480 resolution, nearly full-sized keyboard, and directional trackpad.

Other specs include a 2 MP rear camera, GPS, and accelerometer. There will be a 4 GB WiFi and NEC claims about 9 hours of battery life as well.

Although referred to as a laptop, it really looks more like a netbook in size. But running Android, presumably 2.2 (Froyo) through that Tegra 2 chip will make it quite useful for those looking for a mobile, yet flexible laptop solution. It’s reported to be really light, and NEC has plans to release it only in Japan. 3G/4G and WiFi only variants starting at about $475.