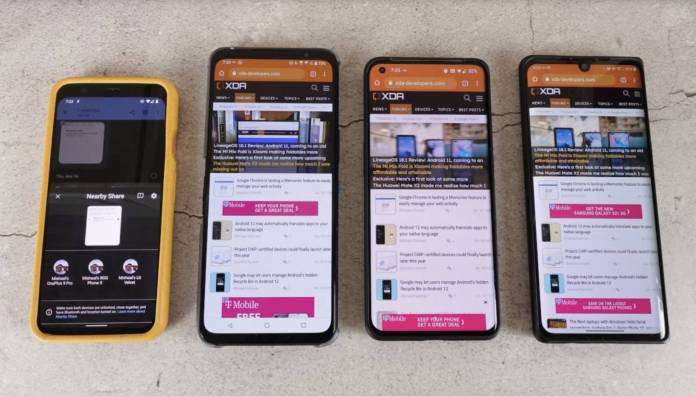 Nearby Share is Android’s version of Apple’s AirDrop although it is not as convenient yet as its competitor. An upcoming update to Google Play Services may bring a new group transfer feature so you can share files to multiple devices at once. There may also be an improvement in device visibility policy so you can share not just with your contacts nearby but with any device that is near you. There’s still no confirmation when the update will roll out but since these new features seem to be functional already, that will probably be soon.

XDA Developers share an APK teardown where they were able to force the upcoming new features for Nearby Share. They have previously shared that they spotted the strings about these new features but now they are able to get the features working. The group transfer feature will let you send files to a maximum of four nearby devices. Unfortunately, you cannot do it all at once as it will only transfer one device at a time.

While you are able to select multiple devices at once, you’ll have to manually approve the file transfer in each one in the order that you selected them. Hopefully, this is something that will change when the feature is officially rolled out eventually as this seems inconvenient. Some of the devices that they used when transferring the files include a Google Pixel 4 (the transferring device), an ASUS ROG Phone 5, a OnePlus 9 Pro, and an LG Velvet (the receiving devices).

Another feature that will come with the update is a change in device visibility. Currently, you can only share with contacts that are nearby but the update will let you share with everyone that’s nearby. There’s a toggle for “use everyone mode temporarily” to prevent possible abuses. But if you think it’s okay for you and the people around you, you can choose to toggle “keep everyone mode all the time”.

There’s no word yet as to when the Google Play Service update will roll out eventually. And just like with most teardowns, there’s no guarantee that this is what we’ll see when it eventually rolls out.