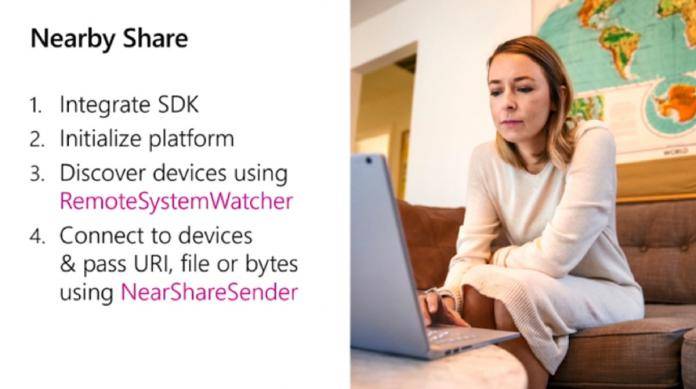 During one of the sessions at the Build 2018 Microsoft developers conference, they confirmed that Nearby Share will also be supported on Android devices. Users will be able to send files and links but the demonstration actually showed it being integrated into an app. This is through adding the Project Rome SDK into an Android app. It will detect other PCs through Bluetooth and then choose either Bluetooth or WiFi to transfer the file (the latter if the devices are on the same network).

However, there is no confirmation yet if the feature will actually be part of the general share contract on Android devices. Hopefully this will be part of future updates since having that option is actually more convenient than just having the feature as part of an app that uses the SDK.

In case you’re a developer though that wants this feature for your app, it looks like integrating Nearby Share is pretty easy. You just have to initialize the platform after integrating, use RemoteSystemWatcher to discover the nearby devices, then connect and transfer the URL, file, or bytes using NearShareSender.