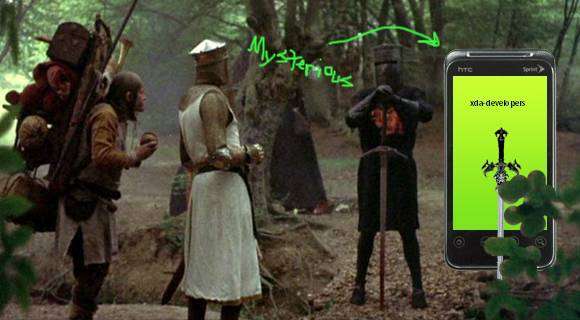 A very mysterious phone indeed! A source reported to be on the inside has revealed an upcoming phone to be released by Sprint: the HTC Knight. It has a sliding screen, will be running some version of another of Android, and has a 3.7 inch screen, which just happens to be the same size as the Nexus One. The source also reported that the phone may be released in under two weeks from today.

An XML file (presumably a READ ME file on how to operate the phone) speaks a tiny bit about the function of the device, namely that it has a sliding screen (which can mean lots of things these days, but more than likely means that it’s got a keyboard under there.) The device appears to resemble the Evo rather closely and has the same USB plug. The image of the phone above is reportedly what the device will look like, provided by the source to the folks at XDA. Text from the XML file:

3. Make sure to activate your device before you operate the handset by setting up the Google account on the device. 4. To view the contacts on the device, select “Contacts” and push “Menu” button, select “Display group > All contacts > OK”. 5. Do not slide screen in/out during the operation.