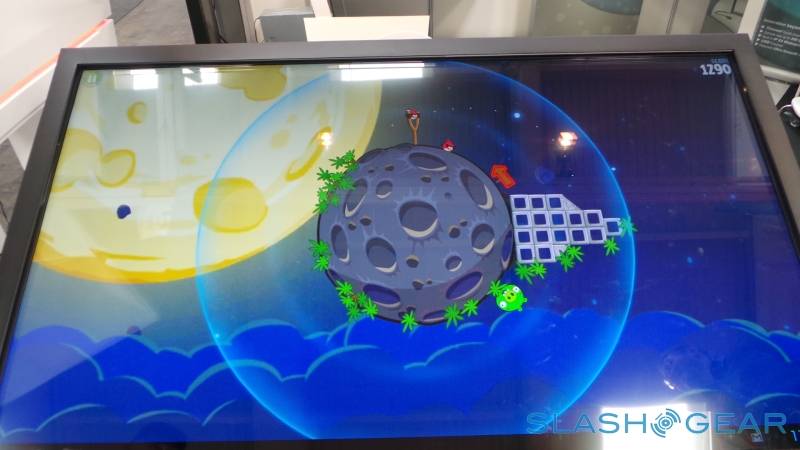 Android is great on screens of all shapes and sizes, but how about enjoying some Android 4.1 Jelly Bean and Angry Birds on a 84-inch 4K (Ultra HD) touch display? That’s exactly what we have for you below. At this years CeBit show MyMultitouch is showing off their new tablet – if you can call it that – and this 3,840 x 2,160 Ultra HD resolution screen called the Alvaro GIANT is capable of running Android, Windows, or almost anything else.

Now we’ve seen massive screens before, and multitouch displays of this size were widely on display at CES 2013 this year in Vegas too. However this thing runs nearly any OS, works wonderfully, and is the first commercially available model with an actual price tag. You won’t want to see how big that price is, but it sure is neat. MyMultitouch is stating the price will be reasonable coming in roughly at $43,000 for retail. Of course this is something for ESPN or news outlets and not the average consumer, but I sure want one.

If you thought the upcoming 6.3-inch Galaxy Note III was big – check that thing out. Running Windows 8 with ease as well as our personal favorite, Android, this is quite the display. The pictures don’t do it justice and that 4K resolution is impressive – even though Android doesn’t support it. With support for over 30 touch inputs at a time, yet lets us play Angry Birds Space. How about that?

Running off a simple thumb drive with Android the display worked with ease, but had to scale down the resolution a little. You can see from the video above some gameplay and all. Obviously the Alvaro GIANT is aimed at retail and industrial markets, it’s still fun to check out. MyMultitouch tells us the display is protected by hardened glass, has a coating to help with fingerprints, can tell if you’re using a finger or a fist, and even works with gloves.