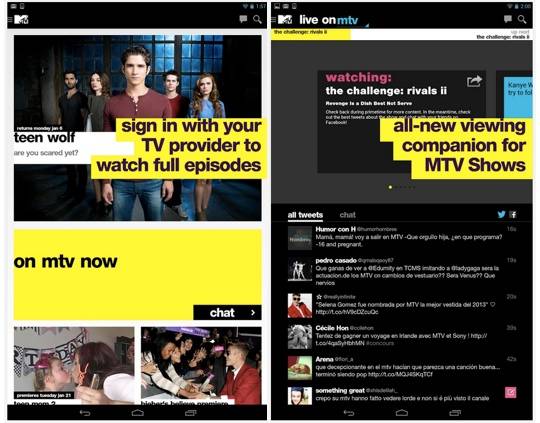 An official MTV app has recently arrived in the Play Store. The app offers video and will also serve as a viewing companion for times when you happen to be sitting in front of the regular television watching MTV on the big screen. In terms of the video, while available, this isn’t an app aimed to please the cord cutting crowd.

Similar to other mobile television apps, MTV also requires the user to login using their providers credentials to view full episodes. MTV has said once logged in you will be able to view “recent” episodes from “select” series anytime and anywhere. But all is not lost if your cable provided isn’t available in the list — MTV did mention they are still working to get more providers on board.

If your provided isn’t included, or if you happen to be a cord cutter you will be able to watch some video, just not full episodes. In this case the app will provide sneak peeks along with after shows and bonus clips. There was also mention of some exclusive content and while there wasn’t a ton of specifics here, it will include bits from series including Catfish, Awkward, Teen Wolf, Ridiculousness and the Real World.

The app will also have music and fashion related news as well as content from MTV Other. Lastly, in terms of the companion experience — this will apply to a variety of the primetime series on MTV and have images, polls, quizzes, behind-the-scenes goodies and more. The app is free and available by way of the Google Play Store.